The Corner of White Street

Recently, visitors to museum, and indeed fetes and elsewhere, have been surprised that Market Lavington had a department store.

‘Where was it?’ they ask and presumably they expect one large building. But rather, the establishment owned by Arthur Walton was in several buildings. All were roughly on the corner of White Street with High Street and Church Street. Maybe this photo will help. 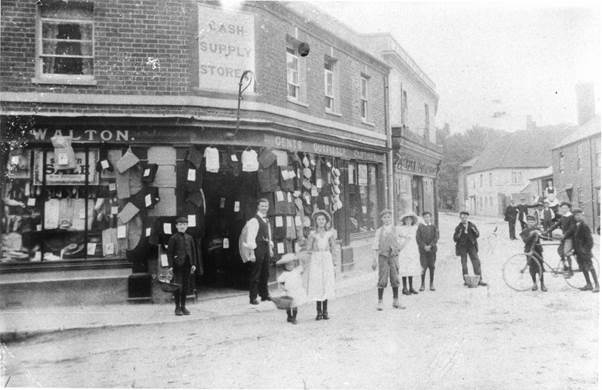 This is an Edwardian view along White Street from the crossroads. We can see the name board Walton on the left and a high level painted sign saying Cash Supply Stores. This is where the hairdresser, Gemini, is as of 2014. This was the Gents’ outfitter department. The next building down, under a top level painted name of Lavington House, was the drapery department. Mr Walton had the Post Office at one time and this was just round the corner on High Street. Across White Street, and not visible in this shot was his bakery  and going round the corner where St Arbucks now is we had his ironmonger and household goods departments. 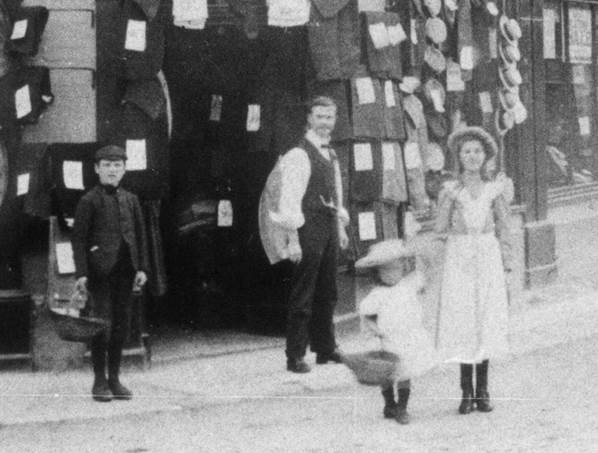 Outside the Gents’ outfitters

We wonder if the very smartly dressed man just outside the shop door could be one of the Gents’ outfitters. The lad on one side of him and the young girl on the other both carry baskets. Perhaps they were made by Alf Mullings on The Clays.

Alf Burgess, the photographer, has managed to include a bicycle. One lad is clearly in the saddle, but two others view for a position with this item which might still have been regarded as a bit of a wonder.

Behind we can see the entrance to Gye’s Yard and there is a man in a white apron on some kind of a cart there.

Then there is the lad in the middle with a bucket. Perhaps he has been down to Broadwell for water.