The Crossroads in the 1930s 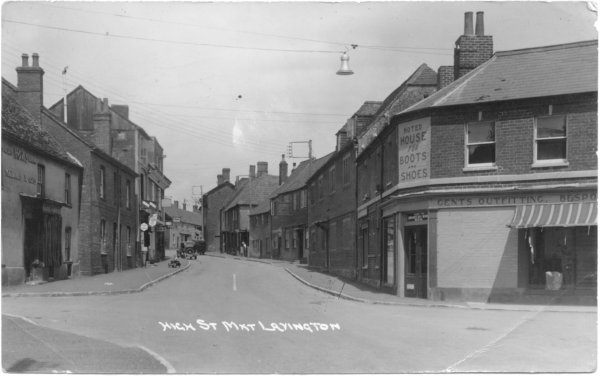 This photo is a very close match with the 1950s photo we showed a few days ago. It shows Market Lavington High Street, from the crossroads (AKA Lamb Corner)  and was taken in the 1930s.

We can start on the left with the bakery business which would have been run by Eric James then. The shop has the James name under the Hovis ad. This is where the Dyers now have the Post Office.

The similarity with the later picture almost suggests deliberate staging, but this one is a Burgess taken photo and the newer one was by Peter Francis. A car is parked almost in the identical place. This one looks to be an early 1930s car – or maybe a 1920s one.

In the newer photo we had a child’s tricycle. This time we have a pedal car on the pavement. A child is driving it.

Beyond the car and actually on the other side of the road there is a van. At a guess this is a butcher’s van, belonging to Doubleday and Francis.

A man is peering out of Chapel Lane and then on the corner it looks as though Mr Walton was still running his department store with the sign telling us it was a noted house for boots and shoes.

There are wires everywhere – it is much tidier in that respect these days. One wire was there to support a lonely street lamp over the middle of the crossroads. People who look up at the roof, above what is now the hairdresser, can still see a part of the mechanism that was used to keep that wire under tension. Maybe that mechanism came into play when a bulb needed changing.