Over the years, Market Lavington’s tally of public houses has dwindled, with only The Green Dragon still in operation. The Bell Inn, The Lamb  and The Brewery Tap are ancient history, whilst  The Volunteer Arms (formerly The Angel) closed in the 1980s and the King’s Arms in 2009. The last pub to close was The Drummer Boy, at 25 Church Street, as recently as 2015. At the time of writing, it is empty and about to be converted into two homes, with another one to be built behind.

At the museum, we have not been able to acquire any Wadworth’s pub signs but

was a Free House and the new owners kindly agreed to give its sign to us. It arrived this week and needs some tlc and cleaning before we consider how to mount it for display. 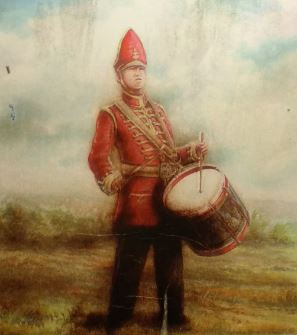 It is but the latest of several signs at the pub. A different picture of the drummer hung there in the 1970s and, formerly, the pub was known as The New Inn, but had to change name when it no longer offered accommodation and so was not an inn.

We look forward to this new artefact joining our many new 2019 displays later in the year.

A memory of the Drummer Boy

Hopkins and the New Inn