The end for the lodge at Fiddington House

Once upon a time (all fairy stories start that way) there was a house called Fiddington House. From the 1830s this was used as a private hospital for those of a nervous disposition – more commonly called a lunatic asylum. It was in the parish of West Lavington.

Several generations of the Benson family had been medical officers at Fiddington and other members of the family lived in local properties. Diana Benson was one of these. She lived in the Lodge to Fiddington House.

The following extract about Diana comes from the website of Turtle Bunbury at http://www.turtlebunbury.com/history/history_family/hist_family_whishaw.html. It refers to our Diana Benson.

Their eldest daughter Diana Whishaw Benson was born on 28th October 1913, three months after the tragic death of Enid’s younger brother Jimmy from appendicitis. She was known as “Bubbles” and was a talented musician, successfully obtaining her Licentiate or LRAM from the Royal Academy of Music exam at the age of 19. She made her debut as a professional pianist at Bournemouth on 20th June 1933, two days before the death of her grandfather. Jim’s last conscious act was to send her a telegram of encouragement. Ian recalls her as “very pretty, small and dark-haired with wonderful eyebrows”. When performing, she would have the audience “half made” before she took her bow and sat on the piano stool. She excelled at the piano, violin and harp but Ian holds that she could master any instrument, “within minutes, or at the outside a week, a month at the absolute maximum … The only one that really flawed her and took her at least a year to master was the Irish tin whistle. Because it was wind not string! But in the end my God she could play that too!” But she was also “fearfully temperamental; she would never have done a thing she was told!” Wendy recalls a recital by Diana during which one of her aunts turned to another and said “Evelyn dear, do give me a recipe for your scones”. Diana slammed down the piano and left the room. “It was terribly funny and such a wonderful thing to be caught saying”, muses Wendy.
On 19th September 1936 Diana married John Atkinson, a popular naval officer from Northern Ireland. He was stationed in Malta during the war but the couple had a serious row when he refused to countenance Diana bringing her Grand Piano out to the island. They divorced in 1940. When John met Diana some years later, he described the experience as “not unlike standing on a rake in such a way that the handle leaps up and belts you in the face”. She subsequently converted to Catholicism and became a nun. She passed away on 20th February 1966.at the age of 53.

Diana lasted a little longer than her former house – the Lodge at Fiddington which is seen here shortly before demolition in 1962.

Diana’s house was small, but contained her beloved grand piano. In the days before TV, locals used to stand around outside to hear Diana play. The sign on the wall does say Fiddington House and the gate led to the main house which was the asylum. 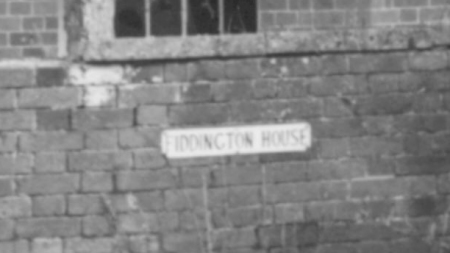 The lodge stood at the entrance to Fiddington House

Let’s just look at an older (1900) map to see the position of the Lodge and of Fiddington House. Nothing remains of these buildings now. 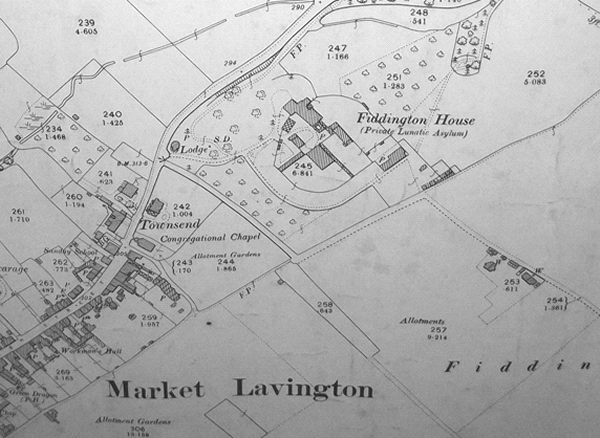