It’s a bit sad that so many people are utterly disillusioned with party politics. Interestingly, it wasn’t always so. Back in 1910 the election appears to have been fought on the streets – certainly in Market Lavington. 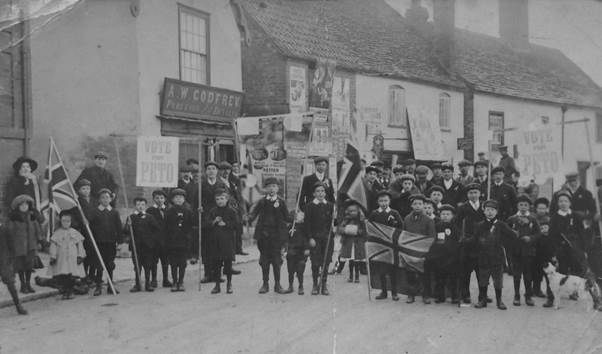 This is Church Street and this view is obviously the same occasion as one shown by us back in 2010. Click here to see it.

The picture is taken outside what was Mr Godfrey’s butchers shop. Soon after this passed to Mr Pike who had it for many years. The little strip of building on the left became Potter’s Stores and to the right of Mr Godfrey’s shop was the Merritt’s cycle shop which later became Mr Reid’s garage.

Banners are interesting. The clear ones just say Vote for Peto and Mr Peto was, indeed, elected. One of the banners seems to be featuring ‘German Bread’. 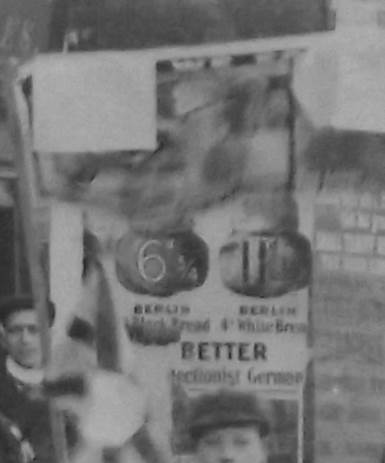 The threat of German black bread if you vote the wrong way!

The cheaper loaf shown is called Berlin Black Bread. It seems that one side threatened the populace that if they voted the wrong way they’d have to eat German black bread along with horse and dog meat sausages. It also seems that the campaign backfired when it was revealed that the king preferred black bread with its rye content and that many people felt it was healthier than the English white loaf.

Basil Peto won the seat for the Conservative Party. However, the wall of the Merritt’s shop clearly displays a liberal poster. 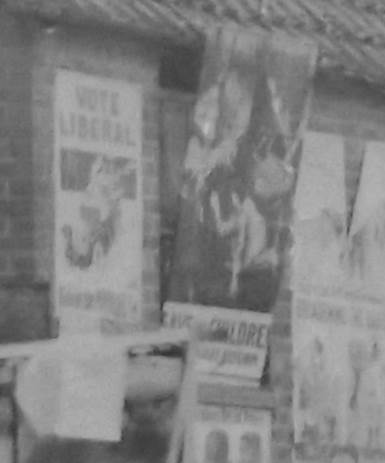 A Vote liberal poster was visible behind the rally. The liberal party formed the government after this election

How much interest will the 2015 election generate in our area? Probably very little but we can expect that the local electorate will vote in force.

There’s little doubt that elections mattered back then, albeit only the men over 21 could vote.