Ten years ago, in 2002, we celebrated the Queen’s Golden Jubilee – the 50th anniversary of her accession to the throne in 1952.

Market Lavington certainly joined in the celebrations and had a real celebrity character to declare the Jubilee Fete open. It was none other than Sir Killalot.

Back then, a chap called Tom Gutteridge lived at The Old House in Market Lavington. Tom was a TV producer and creator of shows through his company at the time, Mentorn. The big show was one called Robot Wars and Sir Killalot was the star of this show. So it was that the robot, Sir Killalot, came to open the Jubilee Show of 2002. Here he is with a crowd of admirers, about to chomp through the chain to declare the procedings open. 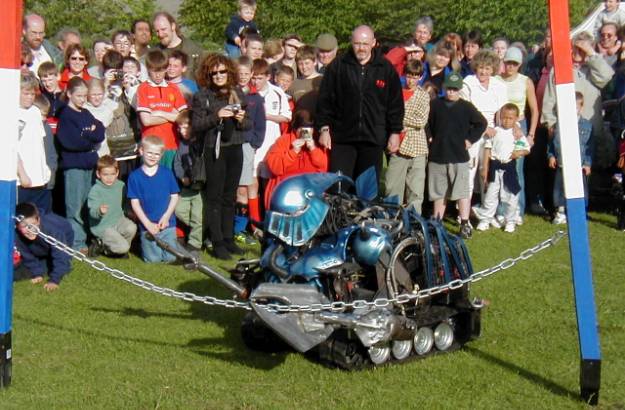 Sir Killalot had a friend there (or should that be an enemy) and the two robots engaged in a bit of combat in the style of the TV programme.

If you recognise anybody in the photo, then do let us know who they are.