The building opposite the co-op was a hardware shop for many a year.

In the 19th century, the Baker family ran the shop selling domestic hardware and they also had a tin smithing or whitesmith’s business. Early in the 20th century, when John Baker died, the Phillips family moved out from Devizes to continue a similar business. Arthur Phillips had a long reign at the shop. He was there in 1926, 1939 and 1964, three years for which we have electoral registers in the museum. Arthur died in 1973.

Tyndale Bailey became the shop proprietor. Our photo dates from his time at the shop – 1977. 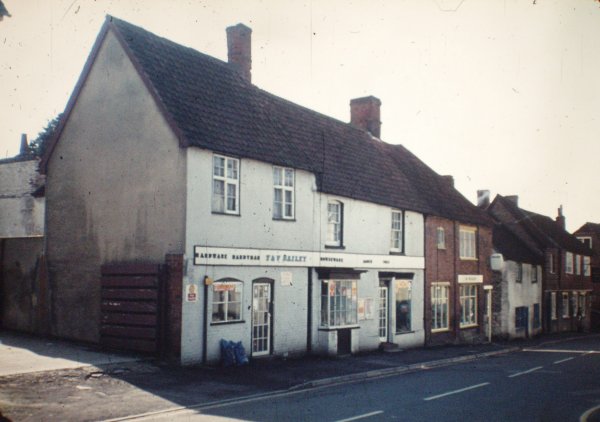 The shop carries the names, T and V Bailey and is offering, amongst other things, Hardware, Handyman and Houseware.

A couple of bags of coal lean by the door. The era of the plastic sack had arrived. The noticeboard, beyond the bay window was used by the Lavington Cricket Club. Mr Bailey was a keen cricketer.

Looking further down High Street, a sign on the corner of Chapel Lane advertises Fish and Chips. They are still available from the takeaway but these days Chinese food features as well. Beyond that, The Kings Arms was still a very active pub, one of four still running in Market Lavington at that time.

To the left of the hardware shop is the entrance to Woodland Yard. We recently looked at the demolition of the carriage arch and building which stood there until 1960.