Market Lavington High Street in about 1956

This picture is said to date from about 1955. The car we see suggests it was nearer the end of the 1950s for it looks to be a Mark II Ford Consul and they were introduced in 1956. The picture was taken by an electricity worker who, later, gave it to the museum.

The scene is the High Street. The building on the right was the Co-op – and it still is. Most other shops and premises have changed function since the photo was taken. At the extreme left we have what was, for many a year, a hardware shop.

Looking down that left side we can see a café sign on the little cottage just past Chapel Lane – the footpath down to the take-away. 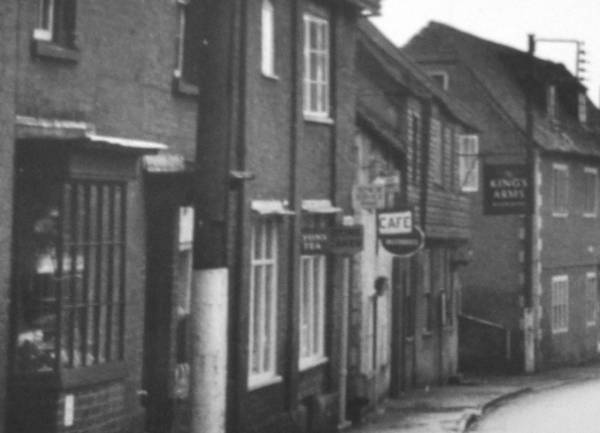 Beyond that there is the Kings Arms, now under conversion to housing. The Red House, beyond that looks more or less unchanged.

Lloyds Bank had a branch in Market Lavington

Down on Church Street we can see that the grocery store (possibly in the hands of Mr Prowse at the time) was there. A delightful old van is parked just beyond it. On the right hand side we can make out a Lloyds Bank sign.

The whole picture shows that electrical work has been going on with a trench dug across the road.

At least we don’t have those ugly poles and brackets with wires on any more.