The hospital in the carnival procession

Here we have a photo we do not know all that much about. We are confident it was taken in Easterton which was where the carnival processions for ‘Hospital Week’ always lined up. Sadly we can’t date the photo or, at present, name any of the people. 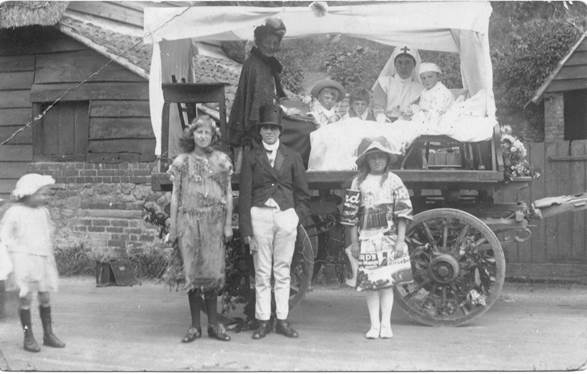 A carnival float in Easterton – but when, and who are the people?

This is a carnival float mounted on a small four wheeled waggon.  On the float a young patient, with a bandaged head is being tended by a nurse. The scene definitely portrays an era when it was the job of nurses to care for patients, rather than to be harassed by paper work. Two young lads and a lady are also by the bedside.

The characters in the hospital tableau

In front of the waggon there is a rather ragged girl, a young man attempting to look a bit of a toff and a lass dressed in adverts. We’ll enlarge her for those ads might give a clue to the date.

The advert girl includes an ad for Bird’s Blancmange

There is also a small child at the left, looking on.

The waggon is nicely decorated with flowers. Twigs with leaves have been woven into the spoked wheels.

Can anyone out there throw any further light on this picture?