The Jam Factory at a carnival

Time was when carnival in Easterton and Market Lavington meant raising money for health care. If you are aged 66 or more then you entered this world before the UK had a National Health Service. If you were not rich, then using the doctor meant relying on charity. Now that’s something most folks hate. But if a fund could be raised out of people having fun, then it didn’t seem so bad. Carnival week in our two parishes was also called Hospital Week. The money raised could be allocated to those in need. What a blessing it must have been, in 1948, to be able to use a doctor as a matter of right.

For local companies, the carnival procession was two edged. Not only were the companies clearly supporting local people, but they were also advertising their wares. 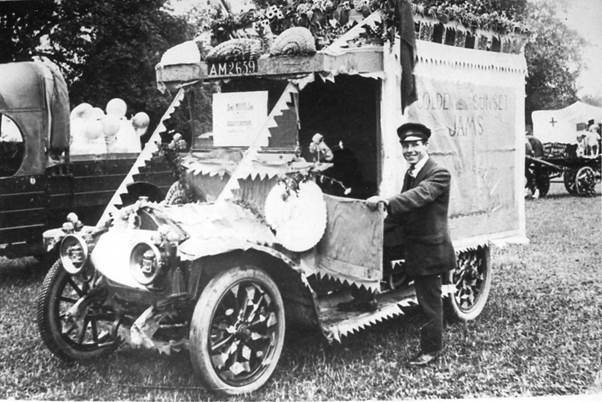 This entry was by Samuel Moore Ltd – the Easterton Jam Factory whose final buildings have recently been demolished.

No effort has been spared in making the van pretty. It is covered from roof top to wheel in something. It would take a more knowledgeable expert than we have at the museum to identify the make of van. We wonder if it is a Crossley (but don’t take that as fact, it is only speculation) and it probably dates from the mid 1920s. We’d expect a commercial company to be aiming to show themselves as modern and with it so the picture itself probably also dates from the 1920s.

The decoration on the side of the van says ‘Golden Sunset Jams. Was this a brand produced by Samuel Moore? Or was it just a slogan for a carnival?

Can anybody name the driver?

All information and suggestions will be gratefully received.