The Kings Arms pub, in the centre of the village, shut its doors to customers a couple of years ago. Last week, our curator was given a chance to take a look around the old pub to see if anything might be suitable for the museum. It seems the sad answere is that there wasn’t a lot, but no doubt some of the items that there were will appear on these pages in the fullness of time.

We’ll start with a photo – about the only one found that wasn’t severely damp damaged. It shows some pub goers in 1982. 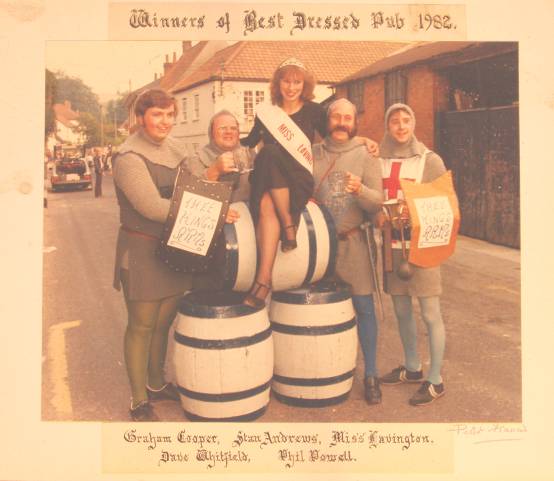 I daresay some of these people – still Market Lavington residents – will be amazed to see this picture appearing. At the museum we are guessing about the occasion. The photo is taken on White Street (by village professional photographer, Peter Francis) and there seems to be a good crowd of people in the background, near Broadwell. This leads us to think the best dressed pub competition might have been a part of the barrel rolling event of 1982.

We do not know who Miss Lavington was that year, so come on Graham, Stan, Dave or Phil, let us know about this event when clearly there were happy days at the Kings Arms.