We have featured a group of the Loyal Volunteers before on these pages (click here). The photo then dated from the 1890s. This one is said to date from about 1875 and shows a much larger group.

Market Lavington and Easterton Loyal Volunteers in about 1875

The volunteers were what might have been called a Victorian reserve army or perhaps a home guard. These were men ready to fight for queen (Victoria) and country and who practised their skills on a regular basis. We believe the man fourth from left is Quartermaster Sergeant John Baker. He ran a hardware and tinsmithing business in the village of Market Lavington and was a renowned marksman. Our photo is a little marked in the area in which John is pictured. We have enlarged some of the men in the centre of the image 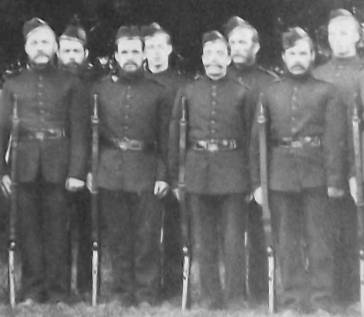 We’d love it if anybody was able to tell us who any of these folks are. They’d probably be at least your great grandfathers, but maybe you have an old photo to compare them against.

If you can help then do email lavingtoncurator@gmail.com