The Market at Market Lavington

Considering that Market is part of the name of our village, we know remarkably little about our market. A market charter was granted to Richard Rochelle, one of the lords of the manor here, in 1254. Snippets of information gleaned from reference books suggest that it suffered from competition from the markets at Devizes and at Steeple Ashton. Other sources suggest that it was doing good business at various times in history.

The village has a large, central Market Place, to the north of the High Street, which is now a car park. Sadly, we lack pictures and written descriptions, to give us an idea of how it was laid out and whether it was just a farmers’ market or if there were food and other stalls for the general public. 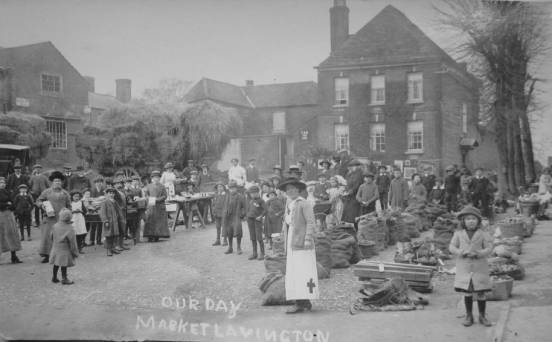 The postcard shows the Market Place, but this was a one off market event during WWI, many decades after the weekly markets had ceased.

William Camden’s ‘Britannia’ of 1722, said that ‘Cheping Lavington; which is the same with Market Lavington and, if so, it has been a market for above 200 years at least’. (See Market Lavington – what’s in a name? )

According to the Historical Manuscripts Commission an attempt was made to deal with badgers at the market in 1612 – 13.

The London Magazine (or Gentleman’s Monthly Intelligencer) volume 20 of 1751 reported that ‘Market Lavington… has a great corn market on Wednesday’.

Pigot’s National Commercial Directory of 1830 said it was a large market for corn and cattle, although it wasn’t mentioned in a list of Wiltshire markets at the end of the previous century. Peggy Gye, who founded Market Lavington Museum, spoke of the market dealing in corn and sheep.

Kelly’s Directory of 1848 said that weekly markets were still held and had a considerable trade in corn and malt, though that trade had much declined. Hunt’s Directory of the same year is less complimentary, writing that ‘Wednesday is market day, if so it can be called, the market merely consisting of a few farmers, who meet at the Green Dragon Inn, in the evening, with samples of wheat, oats &c. This market has been established for four centuries and was formerly an extensive one.’

We believe that the market wound up in the 1850s. Rev. Atley’s 1855 book, ‘A Topographical Account of Market Lavington’, speaks of the market as a thing of the past – ‘Lavington was formerly distinguished for its corn market and the manufacture of malt, in which articles business to a very considerable extent was transacted …  The market-place continues to maintain its former dimensions, and constitutes the favourite resort of the juvenile portion of the population.’

Just recently, we have had sight of a three page document from 1820, that sheds a little more light on the market.

It refers to ‘the revival of the market’, which had presumably closed down and recently been restarted. We will look at the contents of this report in another blog.