The Market Lavington Fire Engine in 1920

Marjorie (née) Milsom wrote the paragraph below – a part of her memories of the fire service in the village.

In 1929 the only fire appliance in the village was a tender which had to be towed behind a lorry, and my father used to stand on the back stoking the boiler when racing to a fire. But one day the tender hit the kerb and it turned over. After my father recovered from his injuries, the Council asked him to build the village a motorised replacement fire engine, which he did. The village of Mere had recently acquired a new fire engine so my father went over and copied the design, then built it to those specifications. The fire engine was a great success and served the village and surrounding villages well for over 20 year years. It was housed in The Fire Station in the Market Place.

But today we predate Marjorie’s memory with a picture of the fire engine in about 1920. It may have been the same appliance, but back then horse power was used. Regrettably, it isn’t the best photo we have. 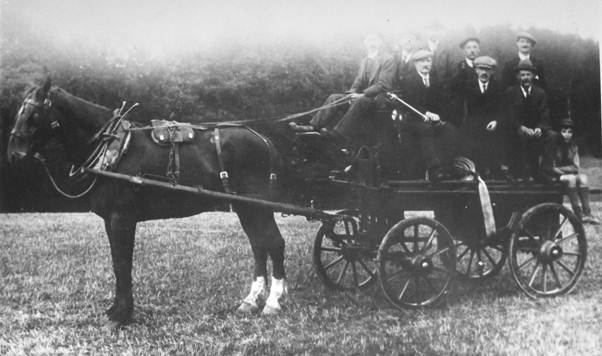 Market Lavington fire engine and crew in about 1920

As we can see, some of the crew have all but faded away in this picture which, we assume, was not taken on active service. There is certainly someone very youthful at the back. Another regret is that none of the people are named so yet again we appeal for help.

But despite our lack of information we still think this is a charming image of the way things were 90 or so years ago.