The Market Place in about 1870

We have been very lucky to have had the use of professional quality photo copying equipment. The device we were able to use (with many thanks to Roger) just whips through the copying process and does a really high quality job. It means we are copying (we hope) the entire archive, even those photos which are not tip-top quality ones.

Which brings us to today’s offering – a picture of the Market Place believed to be very early, dating from the 1870s.

Market Lavington Market Place in about 1870

Perhaps the most surprising thing is to realise how recognisable this looks – it is very much Market Lavington Market Place although, in fact, nothing in the photo remains in place today with the exception of one house, lost behind the trees in the photo.

With that exception, all of the buildings seen were deemed outmoded and unwanted in the 1960s and they were demolished to be replaced by buildings and parking space for the agricultural engineers. When that firm closed, its buildings were demolished and flats and shops were built – known as Rochelle Court. The shop on the corner we see here is where the chemist is now – but in an entirely different building.

In fact the last items to vanish, were the pollarded trees. The last of these were removed only recently.

When we wrote about the band, a couple of days ago, we commented on how short the people looked – which they were. Men, on average, are four inches taller now than they were then. Take a look at this chap. 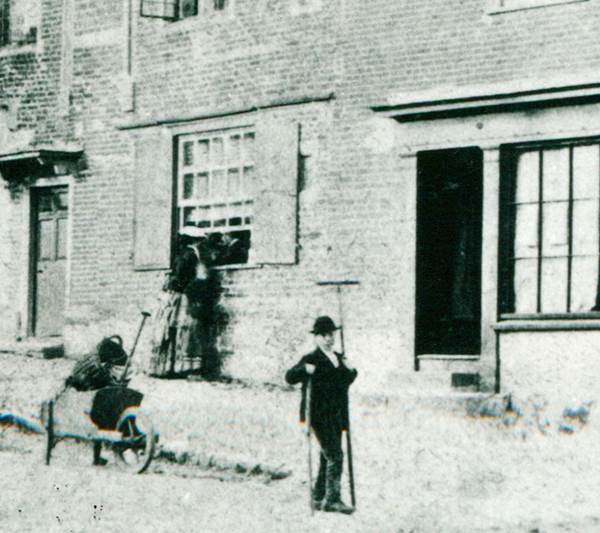 A detail from the photo

He looks to be dwarfed by his rake. Maybe he was using the delightful barrow behind him to help him collect horse manure from the road.

So, yet another delightful image of our village, helping to tell the tale of times past.