The Market Place in the 60s.

Just over fifty years ago, Market Lavington Market Place was modernised. Old buildings, some of them in very poor condition were removed, and new, properly appointed houses and bungalows replaced them. It must have seemed a real godsend to the locals, after years of dereliction. Certainly the new market place was worthy of photographs – or in this case two of them, carefully cut and pasted together using the techniques of then – scissors and paste. Actually, modern technology has been used here to try to hide the join. 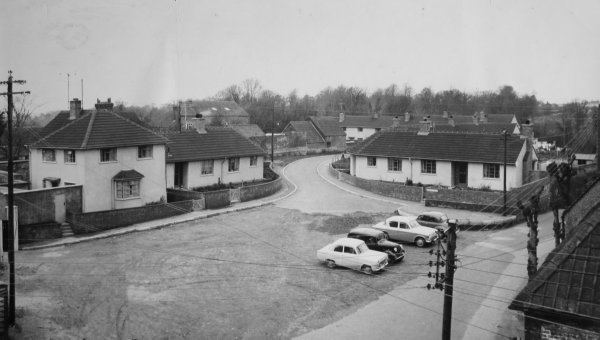 We see the new houses and bungalows. After years of the local lads playing games in the derelict buildings, a neat and tidy area in the middle of the village was much appreciated. Sadly, of course, some buildings of real historic merit were lost in the process, but the people at the time thought they were acting for the best.

All the buildings seen in the photo still stand – apart from the phone box. There’s a bit of that visible at the bottom left.  That was relocated to the crossroads where it still stands, no doubt barely used in these days of mobile phones.

Another huge change in the area is in the number of cars. Back in the 1960s, it was beginning to be the norm for a household to have a car. There are more than double that number now. The Market Place was used a car park, but it was not deemed necessary to mark out where cars parked. You just found a spot and parked. Our picture has but four cars. 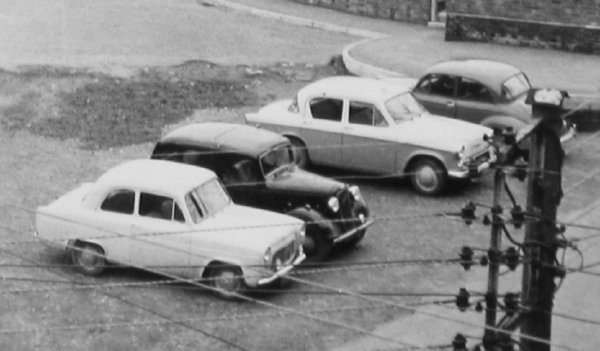 We think the nearest one is a Ford Anglia of the 1950s. Next to that is a pre WWII Austin 10. The third car is (we think) a Hillman Minx. Models of this kind were built for a few years either side of 1960. The fourth car is a Morris Minor 1000. This variant of what is now regarded as a classic car was introduced in 1956.

The Racquets Court, Market Lavington seen beyond the Market Place