Our starting point today is a photo of the McKinnon (or MacKinnon) family and a little bit of information that we have with it. 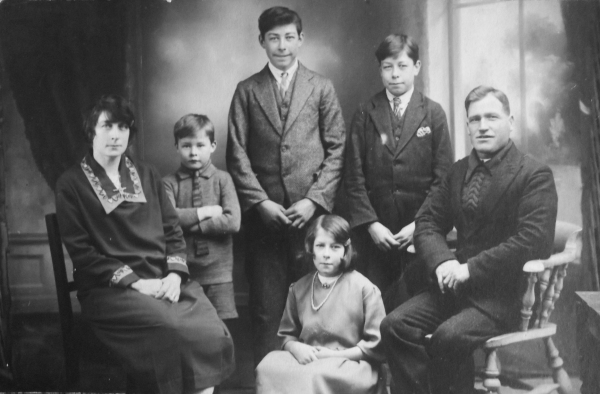 The McKinnon family of various locations in the Lavingtons

Our information reads, ‘One son married Violet Hurkett and lives at the top of Northbrook’.

We can trace that marriage, between Violet R Hurkett and Thomas W MacKinnon at the end of 1936 in the Devizes district.

Now we can trace the birth of Thomas and we find he was born in 1913. His birth was registered in the Pewsey district and his mother’s maiden name was Sainsbury.

Now we can find Thomas’s parents. They were William George McKinnon and Ethel Sainsbury and they married in 1910 in the Devizes district.

Another Mr  McKinnon married another Miss Sainsbury in 1907. We can now find other children born to these couples and we have.

The birth registrations for Gladys and Ivy are 6 months apart, so we assume thery belong to the two different couples.

But now we have a problem, fitting the picture to these names.

It seems likely we have Ernest as the oldest boy and Thomas next. We have Ivy (or maybe Gladys). But the third boy we can’t trace.

Can anyone out there help us? Yes they can. We have received the following information, plus more used to correct the information above.

We think (maybe we can get confirmation) that George William McKinnon was killed in 1917 in World War 1 and is commemorated on the Menin Gate in Yrpres.