Once upon a time, the building at the end of the street was the parish workhouse. The large building facing down The Muddle is the present Rectory in Market Lavington.

The name ‘Muddle’ has an unusual derivation and it has nothing to do with the street being unkempt or untidy. It is a corruption of ‘mud wall’. The oldest residents of the village will remember this simple wall, which lined the street opposite the houses. Strictly, it was not made of mud but of some mud, straw and dung and well topped with thatch to keep the weather out.

Those same oldest residents recall the women, along the muddle, out cleaning and polishing their front steps. They wore aprons made of sacks to protect their clothes.

At times, residents may have objected to their street being called, ‘The Muddle’. The street has the alternative name of ‘New Street’. Both names get used these days.

A second photo near, in the opposite direction, shows the same terrace of housing about a hundred years after the first one. 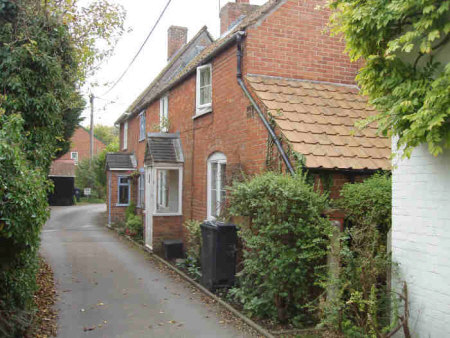 The Muddle around the year 2000