In the twenty first century, the idea of a fairly small, manually rung bell at a school seems entirely alien. But the Old School in Market Lavington was built in the 19th century. As L P Hartley said in his book, The Go Between, ‘The past is a foreign country: they do things differently there.’

Noise levels must have been really different then. Market Lavington is still a comparatively quiet place but a school bell like this one would struggle to be heard over the noise of road traffic and aircraft not to mention occasional artillery and small arms fire on the military ranges. But at a time when people did not have clocks, something was needed to summon the youngsters to school and a bell for all to hear was the solution. 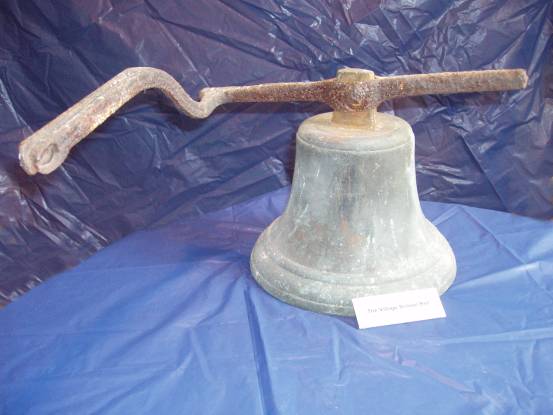 Actually, with the huge size of the parish, many youngsters would always have been out of hearing range. The children at Candown Farm, some three miles away on Salisbury Plain would never have heard the bell and they had to leave home long before any bell would have sounded to reach school on time.

A photograph, in the museum, shows the bell in place.

The old school in 1912, showing the bell tower

This picture was taken in 1912 – nearly 100 years ago but it is still very much the same building except for the little bell tower on top.

For the record the bell mounts are made of ferrous metal and the bell itself of bell metal.