The real Nativity was a service of lessons and carols but it was a service on the hoof and had actors in costume playing the parts. The event involved people of many branches of faith. Under the direction of Mary Campbell, it was truly a community event.

It was also very hard to photograph – so we’ll start with a preliminary – a couple of Kings trying costumes. 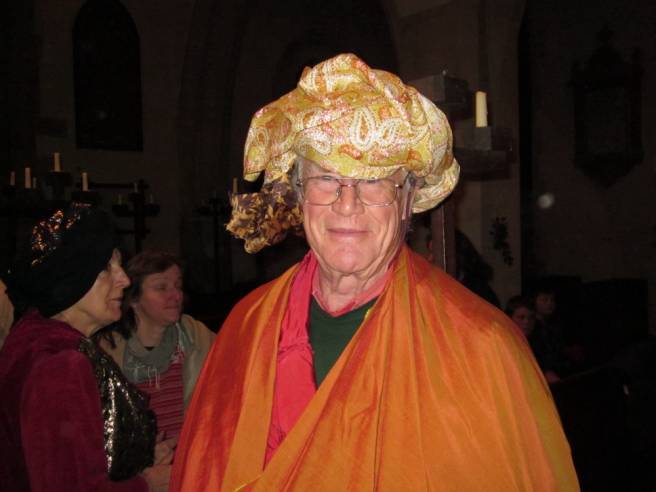 There are a couple of innkeepers behind as well.

The event started, quite ordinarily, in St Mary’s with ‘Once in Royal David’s City’ An angel appeared and told Mary she would bear Jesus.

Then a loud knocking came at the church door and two Roman soldiers entered, demanding that all should leave and go to their home-town for the census. 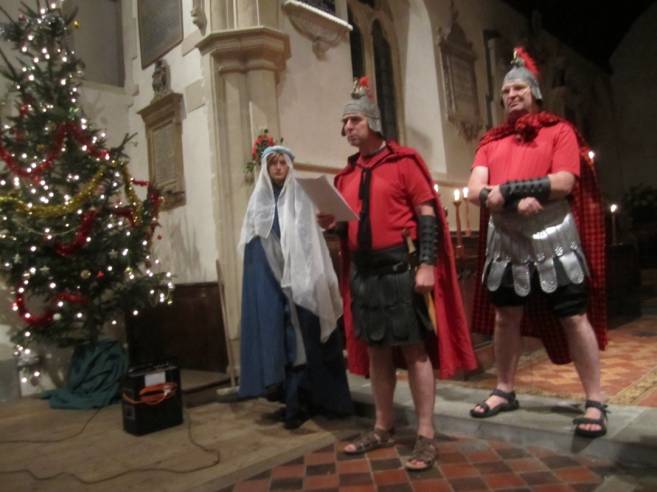 Mary, now heavily pregnant was transported to Bethlehem on a real donkey. And arrived at the inns. A large congregation followed. 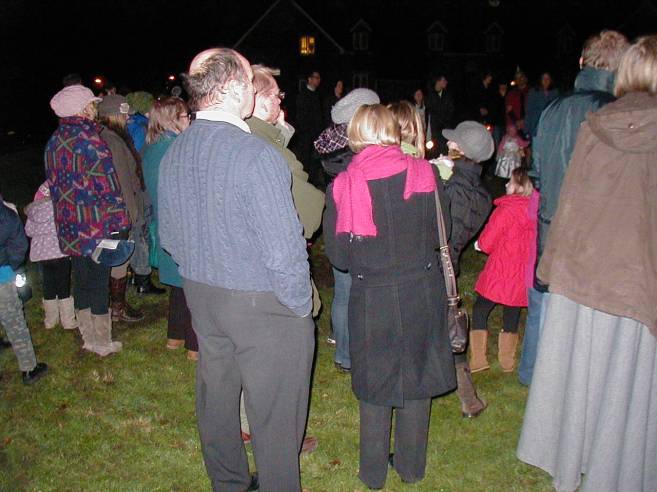 This included people of all ages. 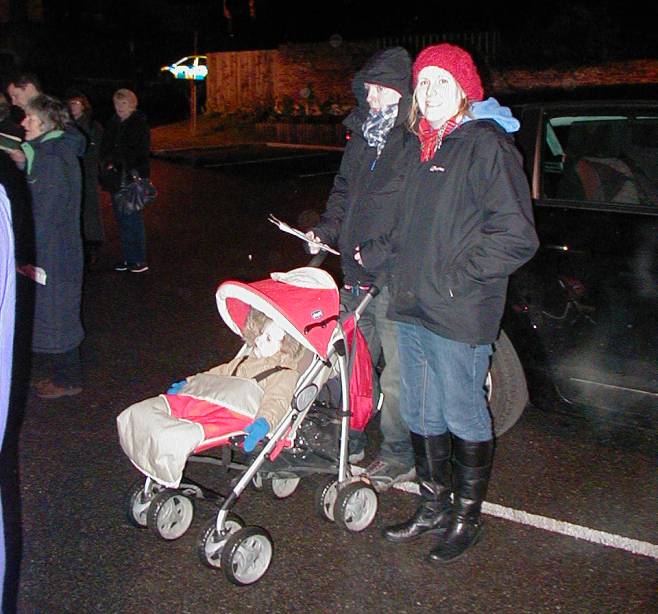 The inns were actually three of the newest houses in Market Lavington – lining the road that leads to the Community Hall. At the first two, the innkeepers were not helpful, but at the third, Mary and Joseph were offered space in the stable, and were led there. 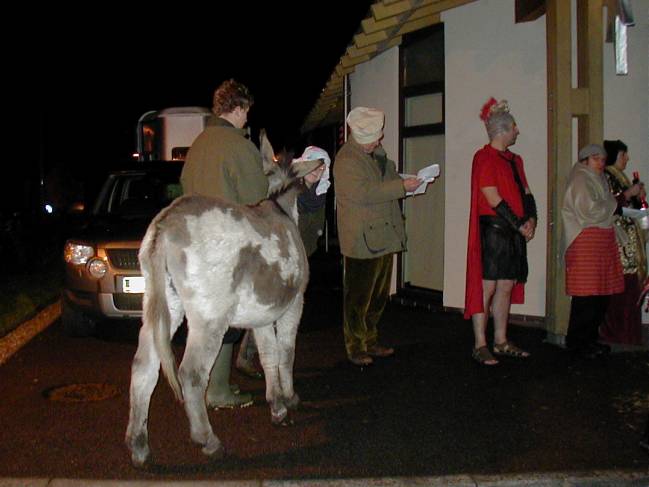 Meanwhile the large congregation of followers were led up to The Green where there were shepherds tending their flock of real sheep. An angel told them that a baby had been born in the stable and the shepherds made their way there, followed by the host of people who were witnessing this event.

The stable had been created just outside the Community Hall – and Mary and Joseph were there, now with the baby Jesus – yes, a real baby of course and a perfectly behaved one too. Shepherds arrived, later, followed by the Kings and we see one of them offering his gift in the photo below. 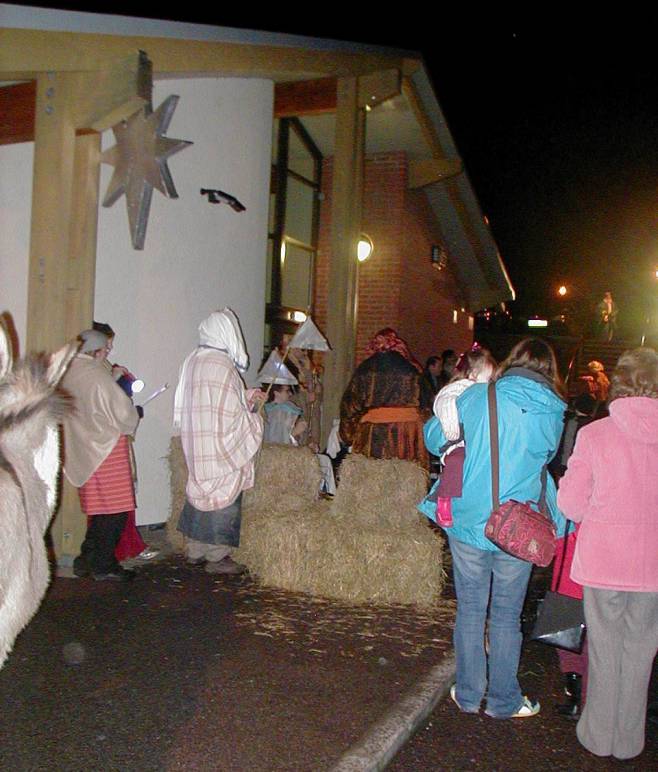 The action then moved to the warmth of the Community Hall where the cast of players assembled and a full hall sang The Calypso Carol and ‘Hark the Herald Angel’s Sing’ and the religious leaders of the community said prayers. 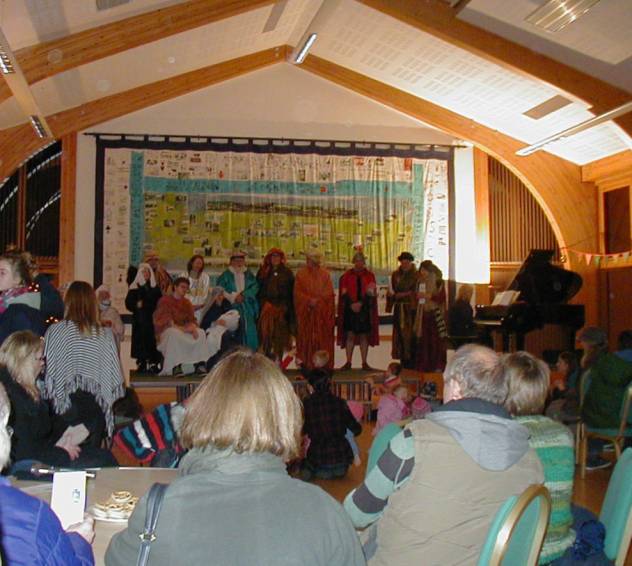 Then it was mulled wine and mince pies for all.

A wonderful event – well worthy of recording in Market Lavington Museum. We do like to record the events of now for future generations to see. These pictures were taken by the curator’s family and cover some of the event. If anyone has further or better photos for the museum then please email them to curator@marketlavingtonmuseum.org.uk.