The Reverend Gilbert King was Vicar of St Barnabas Church, Easterton in the early years of the twentieth century. He is a person we’d like to know more about at Market Lavington Museum. In particular, we’d love a photograph of him.

By 1871, Bryan had taken up the post of Vicar of Avebury in Wiltshire – where he was also described as a landowner. No occupation is given for any of the ten children, ranging in age from 26 down to 10.. Gilbert, aged 14, was probably a scholar.

Certainly, by 1881, Gilbert was a student at Oxford although listed on the census at the Vicarage in Avebury.

Gilbert married Jane Walton in 1885. Jane, like Gilbert, was a Londoner by birth but the marriage took place in the Wycombe region of Oxfordshire/Buckinghamshire.

By 1891 Gilbert was an assistant curate at Avebury. He and Jane had a son, Noel, who was aged 5.

Gilbert remarried in 1897. His new wife was Agnes Thynne and the marriage took place in the Melksham district.

In 1901 Gilbert and Agnes were at The Vicarage in Easterton and Gilbert was the vicar. Noel was boarding at St Edmond’s School in Oxford at the time.

Gilbert and Agnes still lived at Easterton in 1911. Gilbert, by then 54, was still the Vicar. Noel was in Sussex.

Lieutenant Noel Gilbert Bryan King of the Wiltshire regiment was killed on 17th June 1917. He is commemorated on the Menin Gate in Ypres and also on the Easterton War Memorial.

Gilbert King died in the Helston area of Cornwall in 1930. He is well-remembered in Easterton because the road on the sands in Easterton and Market Lavington is named King’s Road.It was Gilbert who was responsible for getting it adopted and surfaced.

We have no photo of Gilbert but we have several of his church – St Barnabas at Easterton. This one, we think, dates from Gilbert’s time at the church. 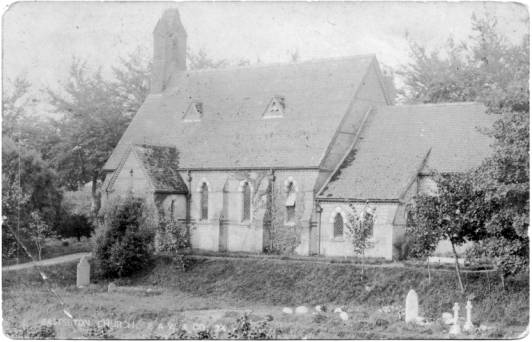 St Barnabas Church, Easterton at the time of the Reverend Gilbert King