We were recently given a postcard of one of the two robber’s stones erected in the area. This one says it is the one on Chitterne Down. The other is at Gore which was once in the parish of Market Lavington but is now, more sensibly, in West Lavington. 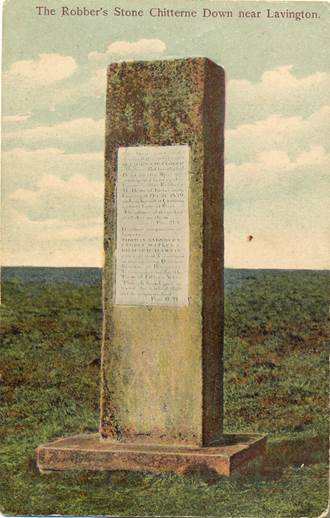 The plaque is unreadable on the postcard, but this is what the one at Gore says.

At this spot Mr Dean of Imber was attacked and robbed by four highwaymen in the evening of October 21st 1839. After a spirited pursuit of three hours, one of the felons, BENJAMIN COLCLOUGH, fell dead on Chitterne Down. THOMAS SAUNDERS,  GEORGE WATERS & RICHARD HARRIS were eventually captured and were convicted at the ensuing quarter session at Devizes and transported for the term of fifteen years. This monument was erected by public subscription as a warning to those who presumptuously think to escape the punishment God has threatened against theives and robbers.’

Yes the stone does have an e before i in thieves!

It is the other side of this card which gives us an intriguing mystery.

Now to the message – a strange one.

If you rob anyone you will fear and then you will run and you may get the same as this man got. I mean the thing you can’t see. I believe that you want this kind.

What does it all mean? Is the sender threatening Miss Draper with death? Is ‘this man’ Benjamin Colclough which you certainly can’t see on the postcard?

But then the last sentence might imply that the kindly sender had found a card he thought Miss Draper would like. And presumably she thought enough of it to keep it. Edith Bishop – the former Miss Draper died in 1969 and the card was obviously passed on. It is now well over the 100 years old.

We are left wondering who M R P M was. Presumably they were closely connected with Market Lavington as the post mark carries the village name. There’s a chance that this person was closely connected with the Congregational Church for the Drapers and the Bishops certainly were. But as yet we have not thought of a way to identify the sender.