The Robber’s Stone at Gore

Our previous blog post The Robber’s Stone tells of a highway robbery in 1839,  where the victim and others chased the four highwaymen, leading, eventually, to the conviction of three of them and the death of the fourth. That blog showed the museum’s postcard, with a picture of the stone erected on Chitterne Down, where Benjamin Colclough fell and died.

We have now acquired another postcard relating to these events. 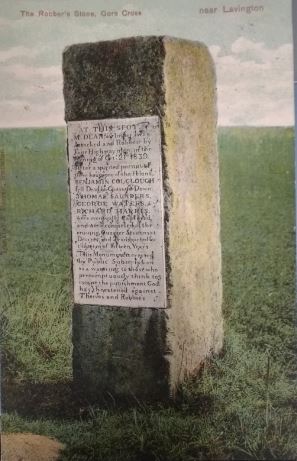 The Robber’s Stone at Gore Cross

Again, the picture is of a limestone plinth, with a cast iron memorial plaque, but this one is at the site of the robbery at Gore, near the crossroads of the A 360 south of West Lavington and the Ridgeway route across the northern edge of Salisbury Plain and leading to the closed village of Imber. A lot more information on this subject can be found on the West Lavington Parish Council website https://www.westlavington.org.uk/historic/robbers.php

The Domesday Book census of 1086 tells us that Robert Marshall held Gore. He also held Lavington. The farmstead there had a chantry chapel, dedicated to St Joan ( or possibly St John) a’Gore in the 1300s. It was never a big settlement and had 12 poll tax payers in 1377. Anyway, it was a tithing of Market Lavington parish and so comes in the remit of our village museum.

Flo, who sent the postcard in 1905, was staying two miles away from the Robber’s Stone at Gore. She was keen to return to Clifton, having ‘had enough of the country where you can’t here (hear) nothing but a lot of calves keeping you awake all night’! 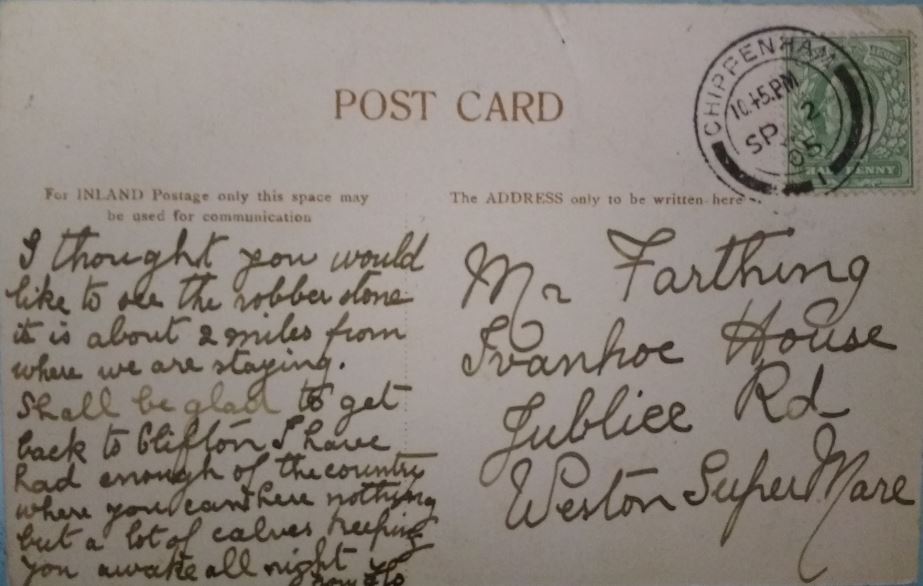 We like it here and are pleased to receive and conserve all sorts of items from anywhere that has ever been in the parish of Market Lavington. That includes Gore as well as Easterton, Fiddington and Frieth.