One of the earliest ‘musical’ bands in Market Lavington was a rather ad-hoc collection of men who earned the nickname of the Rough Wallopers.

The name was probably apt for their purpose was to make plenty of noise rather than to be strictly musical. We have a photo of them outside the Green Dragon. 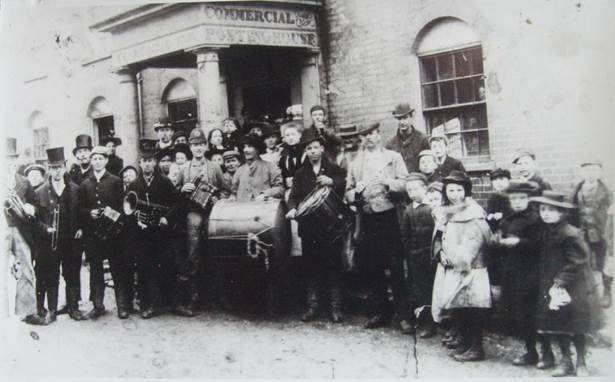 The Rough Wallopers outside the Green Dragon in about 1870

This rag, tag and bobtail collection of noise merchants were a band of a type known as a skimmerton band.

A person would be a skimmerton if they tried to impersonate an offending spouse with intent to ridicule. A procession, including a band, would form up behind the skimmerton and make as much noise as possible, thus informing all of the locality of the bad behaviour of the spouse.

Sometimes the procession would form up without a true skimmerton to lead it. For example, a husband seen to be severely hen pecked might get ridiculed by his fellows, perhaps in the hope that he’d stand up for himself better. It sounds almost like the 19th century equivalent of cyber bullying.

Quite often the ‘victim’ was a wife who had been unfaithful to her husband. In mob fashion the band would march to the house of the offending women and make sure all knew of her infidelity.

Perhaps it is fair to say that people haven’t changed much. These days there might be a hate campaign on Facebook but it amounts to much the same thing.

We don’t know who any of our Rough Wallopers were and it is doubtful that anyone would be able to name any. We believe the photo dates from around 1870.