The year is 1921. Young Ena Gye has written a play to be performed by her friends and family. It is called The Runaway Husband. Perhaps Ena, who was seven at the time, based this on some real life experience. Doting parents took a photo – or arranged for one to be taken. 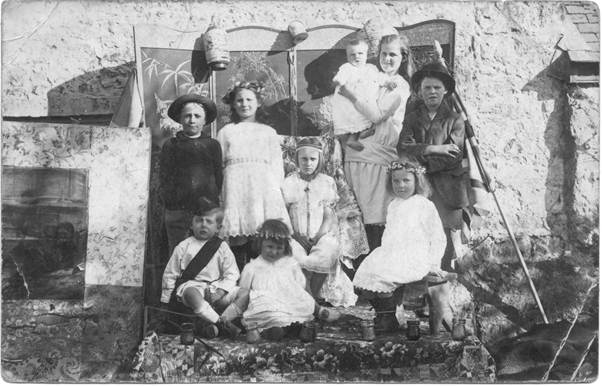 What a charming tableau. Apart from the children – we’ll return to them – take a moment to admire the footlights.

The wonderful glass candle holder footlights. I wonder what became of them.

Small jars which look to be different colours, hang from a string. They probably contained night lights and would surely have looked very pretty.

But back to the children. 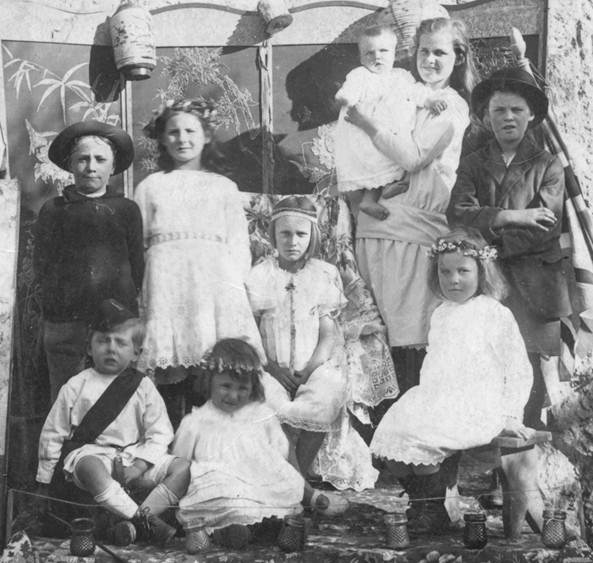 Close up on the children

These are well captioned on the reverse of the card. 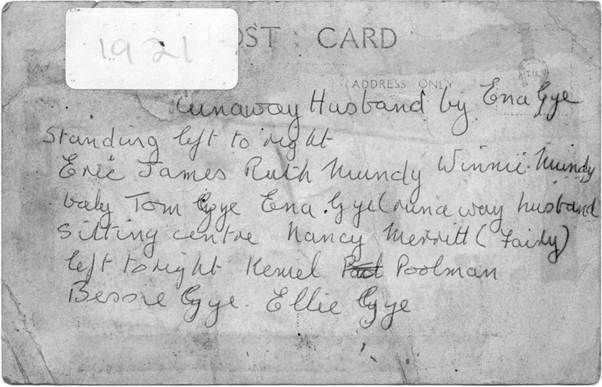 A well captioned card. We know who all of the children are!

So, standing from left to right we have Eric James, Ruth Mundy, Winnie Mundy, Tom Gye (the baby) and Ena Gye taking the part of the runaway husband. Nancy Merritt sits in the middle and the other sitters, from left to right are Keniel Poolman, Bessie Gye and Ellie Gye.

We have looked at the Gyes and their cousin Eric James in the past, so let’s consider the friends this time.

Winnie Mundy was an incomer. She had been born in Hatfield, Hertfordshire in 1907. Her parents, Arthur and Margaret (née Burgin) had married there the year before. But in 1911 the family were in Market Lavington where Arthur was a bricklayer.

We think Ruth Mundy is little sister. Certainly Arthur and Margaret had another daughter in 1912 in the Devizes area so probably in Market Lavington. One letter of the record is difficult to read but the lass appears to have been named Sarah R I Mundy. So maybe she was known by Ruth – the R word. Unfortunately it is the R which is the blurred letter.

We are less sure about Nancy Merritt. A girl with that name was born in Farnham in Hampshire in 1912 which could be the right age for the girl in the photo. But here was a large Merritt family who lived close to the Gyes. It seems likely that Nancy was one of them.

Keniel Poolman was the child of Andrew and Rose (née Polden). He was registered as Jacob J K Poolman after his 1918 birth. We know that the Poolmans lived near the Gyes on White Street in Market Lavington.