Sainsbury is one of the most common names in the old baptism registers for Market Lavington with some 250 people of that surname baptised between the 1660s and the 1830s. This puts it on a par with the commonest name in the country – Smith. The Sainsbury family were important in terms of numbers.

But some were also important in terms of status. Amongst these was Thomas Sainsbury. 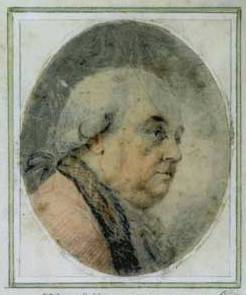 The memorial in the church chancel reads-

Three Sainsbury family members have set up a local charity, which is known as the Sainsbury Bread Charity. Thomas gave £200 to be invested with the income to be distributed amongst the poor by his will of 1795. William Sainsbury added a similar amount by his will of 1796, which came into effect when he died in 1806.

In 1833 the charity provided 668 loaves of bread shared amongst 160 families.

The bread charity ticket we have at Market Lavington Museum dates from around 1960 and has been signed by the Reverend Daunford Davies. 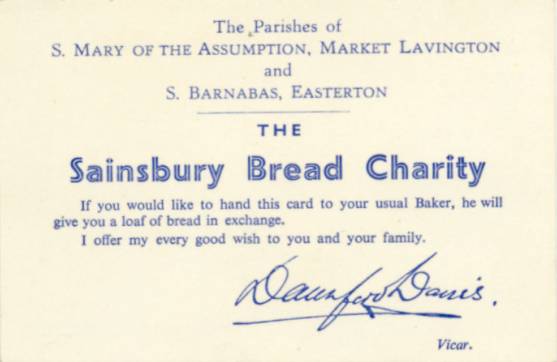 Amongst many Sainsbury items we have at Market Lavington Museum there is an enormous Sainsbury family tree. The terms of the gift of this prevent us from publishing it so if you want to see it you’ll need to make a trip to Market Lavington.