So what is a seed fiddle – maybe this information, taken from http://www.antiquefarmtools.info/page3.htm will give an idea.

Portable, hand-operated broadcast sowing machines were introduced from America from circa 1850 onwards. The most novel, if not the most popular, of these was the seed fiddle, which took its name from the fiddle-like action required to distribute the seed. The device was suspended to one side of the operator by a shoulder strap and supported by one arm. It consisted of canvas seed bag housed in a small rectangular box frame with an horizontally mounted finned disc which was rotated in alternating revolutions by a leather thronged bow. As the bow was moved from one side to the other with each step the sower took, a regulated amount of seed dropped from the bag on to the revolving disc which scattered it in a wide arc from 16 to 24 feet across according to the type of seed. The bag held at least 7 lbs or 3.18 kg of seed. Equal seed delivery was maintained by a jigger plate actuated by an eccentric hub on the disc’s spindle. The rate of feed, adjustable to the length of stride, was controlled by a levered slide with up to ten different settings. A metal band behind the disc prevented seed from being thrown backwards. Discs of earlier models were fitted with four fins but later versions had six. The fiddle was relatively simple to operate and sowing on both sides it was claimed that two or more acres could be sown in an hour.

Used mainly for grass and clover many of them were imported but some, notably the ‘Aero’ brand were made in Kilmarnock and distributed all over the country until recent times. In 1940 they sold for 27 shillings and sixpence plus a shilling for carriage!

This picture, from http://www.war44.com/women-war/385-women-work-during-world-war-ii.html was not taken in Market Lavington or Easterton, so far as we know. 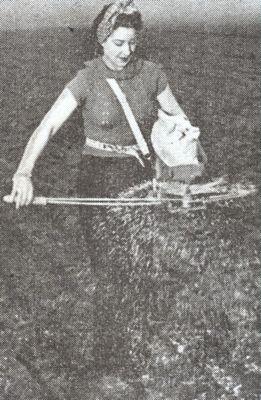 Market Lavington Museum was given a seed fiddle last year. It has been away, at the Wiltshire and Swindon History Centre at Chippenham, for conservation work, but is now back at the museum and on display. 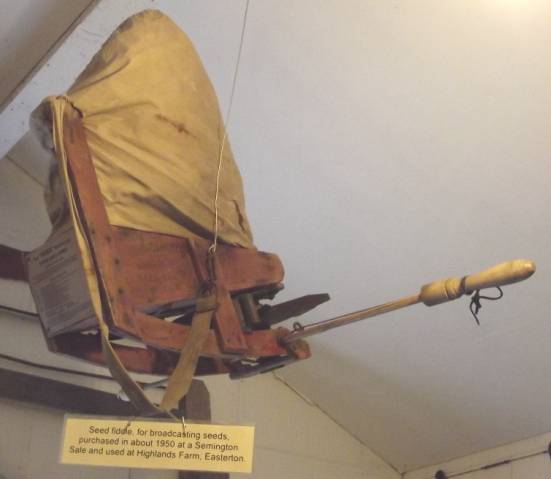 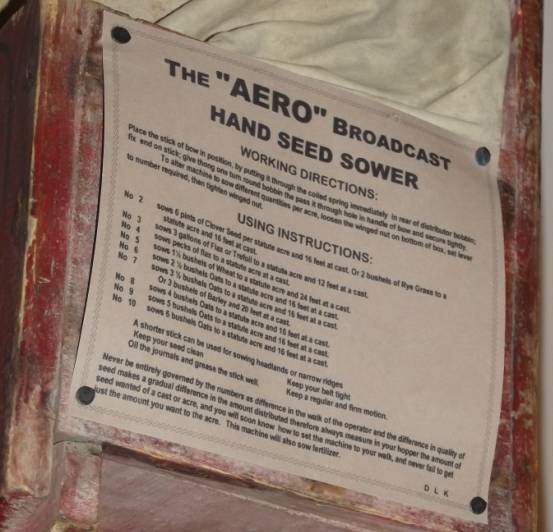 This one was bought second hand by an Easterton farmer. He bought it in about 1950 from the well-known (to farmers) Semington Sale. These sales were held in a field at Semington, not far from Trowbridge and were wonderful occasions for old friends to meet, yarns to be exchanged and second hand farm goods could be bought and sold by auction. It was given to Market Lavington Museum by the farmer’s son.  He still lives in Easterton and he remembers the fiddle in use.

These devices were used well into living memory in the Lavington area, for they were simple and efficient distributors of seed.