We have another view of the road known as The Spring today. This one is some 17 years newer than the one we saw yesterday. It was taken in 1978 and shows a view across the field once known as the Warrington Field. By 1978 part of this had become the front field at Lavington School and part of it belonged to Dauntsey’s School. Here’s the image. 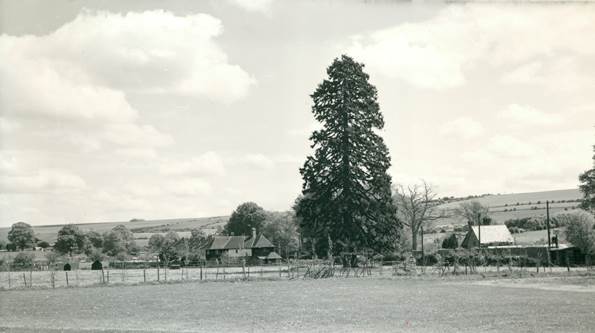 The most prominent feature in this photo is the tree which stands in the grounds of Lavington School. This is a Wellingtonia Fir and was planted in 1887 to mark the Golden Jubilee of Queen Victoria.

To the left of the tree we can see a reminder of an earlier use of this field. 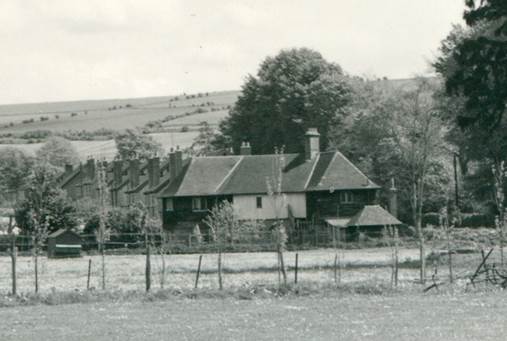 This building had been originally erected as the cricket pavilion in about 1910. Charles Awdry, who owned the Manor at that time, was keen on cricket and laid out a very classy ground with a superb pavilion. After Charles’ death in 1912 and then the outbreak of World War One, the cricket pavilion found other uses. At the time of this photo it was probably the home of the Lavington School caretaker. It has now been demolished and a small estate of houses, ‘Pavilion Gardens’ stands on the site.

The photo shows the house once known as The Alban Estate, lining The Spring beyond the pavilion.

There is another house to the right of the tree. 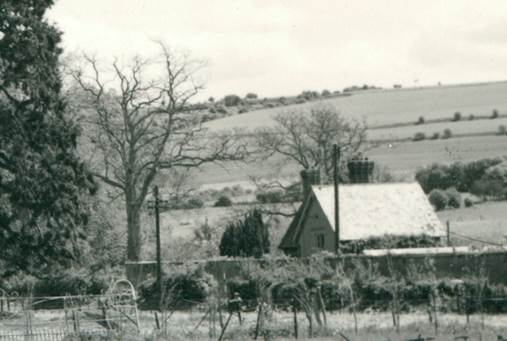 This was the gardener’s cottage for Clyffe Hall and would once have been lived in by James Lye. He was known far and wide, particularly for his skill in raising fuchsias. He developed many cultivars and many are still available. Gardeners could grow these Lavington developed plants for there is a James Lye Fuchsia collection, dedicated to preserving the known James Lye varieties and, just maybe, finding some of the lost ones again. You can see their site at http://www.jameslyefuchsias.co.uk/

That’s quite a bit of history in a small area.