Petrol stations are becoming as rare as hen’s teeth in rural areas. Forty years ago petrol could be bought in West Lavington, Market Lavington, Easterton and Urchfont. Now those who wish to purchase fuel for cars have to travel to Tilshead, Devizes or even further afield.

Market Lavington’s petrol station was known as The Spring Filling Station. Not only could petrol be bought here but so, too, could brand new and second-hand cars. There was also a car servicing area for repairs, servicing and the MOT test.

Our picture shows the area in the 1970s when Mr Haines was there with an agency to sell Fiat cars. 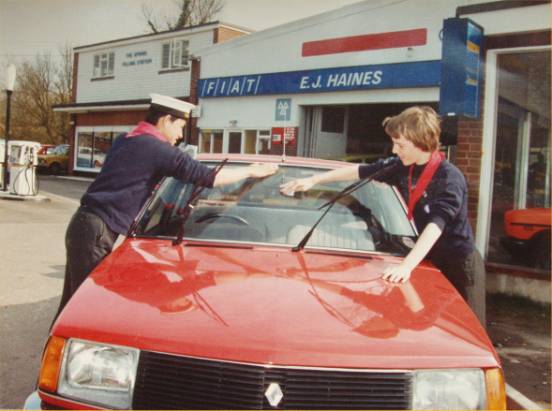 The Spring Filling Station – a photo at Market Lavington Museum

Two members of the local scout troop (we have Sea Scouts in Market Lavington) have been offered some space on the forecourt to do a bit of car cleaning. No doubt they charged a small sum raising money for the scouts.

Later, the garage became Shires Garage and sold Seat cars. And for village newcomers that Shires name gives a clue to location, for where this business once stood is now a row of modern houses – Shires Close.

Does anyone recognise the scouts?  We’d love to put names to them. And maybe a person who worked at the garage could record memories for us.

We have those names – thanks to Allan. They are Allan Harridine on the left and Ian Maclockland (? spelling) on the right.