The thatcher – a newspaper cutting

On 24th July, 1953 a local paper carried a feature about ‘Old Market Lavington’. Sadly, the person who kept the paper removed its name so we do not know which paper it was.

The page about our village contains a number of stories about people and places, some from long before 1953 and some about older people who were still alive.

Today we look at Mr Hiscock, the thatcher. We did look at this thatching family back in November, at which time our curator said, ‘We’ll see what else we can find out about the Hiscocks. Here is a bit more. 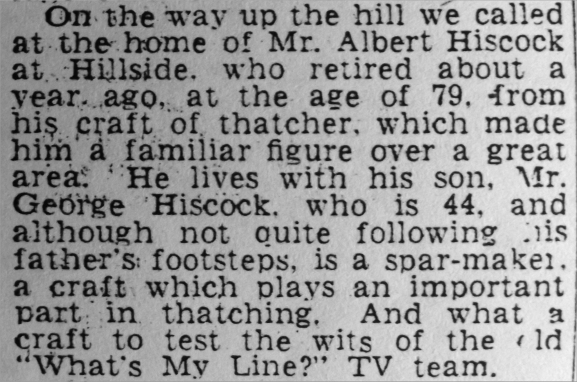 Small news item about Albert Hiscock from a 1953 Wiltshire newspaper

Above we see the small item about  Mr Albert Hiscock, Albert. Albert was born about 1872 in Potterne parish, but by the time of the 1881 census he was in the Lavington area – Fiddington, to be precise – where he lived with his parents (dad, Jacob, was a thatcher) and brothers and sisters.

Albert was still with his parents in 1891. This time, in Easterton. Albert was described as a gardener on this census.

In 1901 Albert lived in Little Cheverell with his wife, Harriet and the first couple of their children. Albert had now become a thatcher – following in father’s footsteps. He was still in Cheverell in 1911.

We do not know when Albert moved to Market Lavington, but the photo with the newspaper article tells us that in 1953, he lived with his son at Hillside in Market Lavington.

Albert Hiscock of Market Lavington in 1953

Albert died in 1955, just a few months after Harriet. Both are buried in the churchyard at Market Lavington.

We’d still like to know more of the Hiscock family. Do get in touch if you can tell us any more.