As a former market town, it is no wonder Market Lavington had a town crier. Before the days of mass media, or, indeed, mass literacy, they had a vital role in keeping people informed. They were, in effect, the news readers of their day and their audience was anybody close enough to hear them.

In Market Lavington, at the start of the twentieth century, our town crier was Billy Coleman (or Colman). It was his function to stand out in the street, ring his bell and call, ‘oyez, oyez, oyez,’ before announcing his news. Oyez is based on old Norman and means ‘hear ye’ or, in other words, ‘shut up and listen’.

Our picture shows Billy on High Street with a collection of listeners. 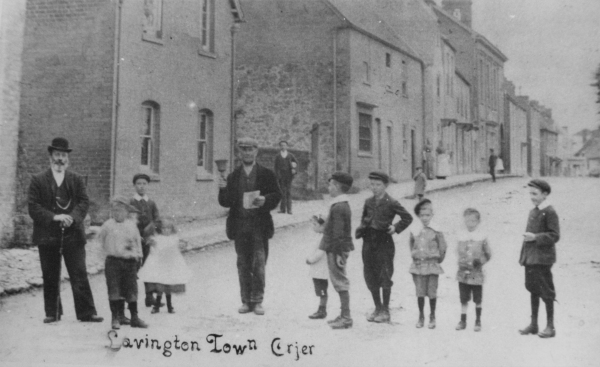 Unfortunately, we do not know much about Billy. 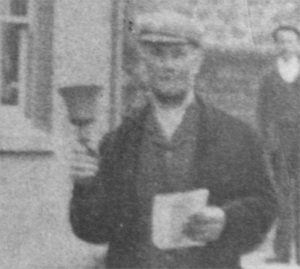 He was the town crier in 1904 and it is known he also woke up people who wished to catch an early train from Lavington Station.

Market Lavington’s next (and last) town crier was Tom Haines who was certainly the incumbent in 1935.

A possible William Coleman was a shoemaker by trade who worked on High Street in Market Lavington. He was born in the 1840s and the man in the photo doesn’t look to be as old as that birth date suggests for an early 20thcentury photo. If you can help tell us anything about Billy, then do contact the curator.

The man with the beard has been identified as Mr Henry Wells of Easterton. 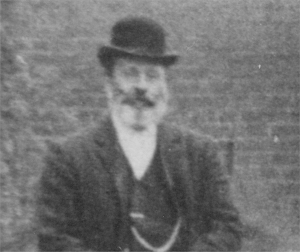 Henry Wells of Easterton was born in 1850

Henry was born in 1850 which helps give a clue to the age of Billy.