The Tudor Cottage on Northbrook

As Frank Sinatra said, ‘regrets, I’ve had a few’. And it is regrettable that this little cottage failed to survive. Mind you, you won’t think that if you live in the decent modern house that now occupies the same plot. Many people, however, feel it a great shame that this cottage was consigned to oblivion as recently as 1984.

Tudor cottage on Northbrook, Market Lavington. For many years this was the home of Tommy Burden

The cottage, which stood close by the bridge where the road called Northbrook crosses the stream, does look very attractive – an idyllic reminder of past times. 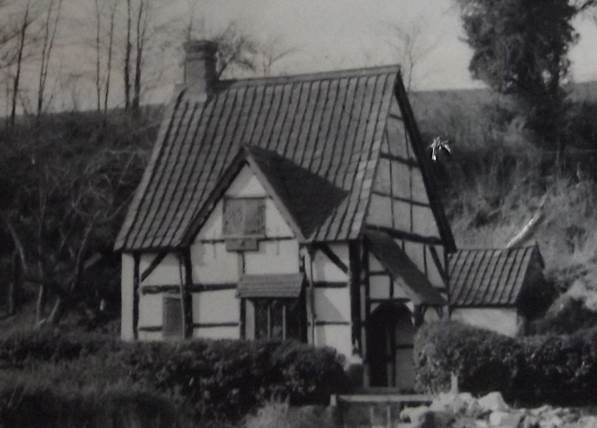 This idyllic cottage was demolished in 1984

It is possible to imagine this cottage as the home of Little Red Riding Hood’s grandma. No wonder some locals called it the witch’s cottage or the Noddy House.

One suspects it was originally thatched. It has that steeply pitched roof that indicates this, as well as an absence of guttering.

Having quoted Frank Sinatra, I’ll mention another hit of the 60s – ‘Out of Time’ by Chris Farlowe. For, I suppose this cottage just ran out of the right kind of time.

It was small, and suited to be a bachelor pad or maybe a nest for newlyweds. But these became the people who didn’t have time or inclination for a high maintenance house and garden. Nobody actually wanted to live there and take on the responsibility for the place. It stood empty for some years before demolition.

Our museum founder, Peggy Gye, was always of the opinion that time couldn’t stand still and that our village must develop. She would also have put any regrets behind her.

The cottage has gone and we can’t bring it back. The replacement house is suited to modern living and the village has moved on.

But at the museum we have preserved the heritage of both Market Lavington and Easterton, at least in photos. And that, of course, includes photos and memories of this cottage which for many years was the home of Tommy Burden.