Some four years ago we wrote about the Webb family and you can click here to read that post. We are still seeking more information.

Today we will show a couple of certificates as we examine that family again. (click on pictures to see a readable sized version)

We can see that Thomas Richard Webb was born on 28th May 1846. His father was called John and he was a bricklayer. His mother was Mary – formerly a Miss Merrett. When Mary registered the birth she gave her address as Market Lavington.

We can see from the 1851 census that the family lived on Church Street in Market Lavington and can see that the whole family were born in our parish.

The first thing we note is that the marriage was at the Registrar’s Office in Devizes from which we guess that the family were not church goers. Thomas Richard Webb had followed his father into the bricklaying business and still lived in Market Lavington. His bride was Ann Kite of West Lavington. Her father, John, was a labourer.

A child was soon born to this marriage.

Richard was born almost a year after the wedding on 1st May 1870.

The family can be found on the 1871 census, still living on Church Street in Market Lavington.

More children were born in Market Lavington but in about 1879 the family moved up to the London area where, no doubt, Thomas was able to make a good living.

One of these children was Edith Webb, born about 1873. She obviously moved up to London with the family but when she retired she returned to Wiltshire. She had married but we have not traced her marriage. Our correspondent sent us this photo of her house as he remembered it in the 1950s, with thatched roof, outside loo and a well. He tells us the cottage was in Easterton. 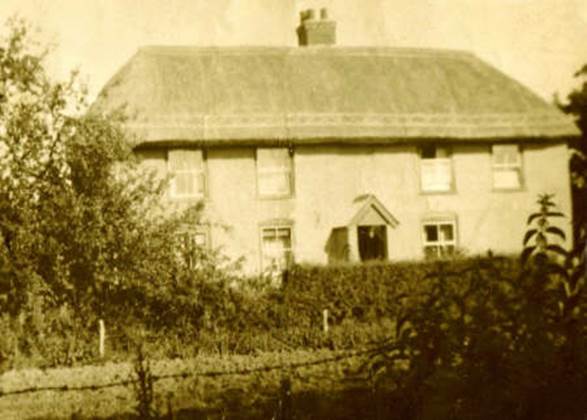 Can anybody identify just where this cottage was?