Some findings for Market Lavington Museum are just a tad bizarre. This one is almost absurd in the manner of its finding. It dates from about 1973 and was in our curator’s own collection of slides. It shows a small steam beam engine which was made by William Cambridge in Market Lavington. 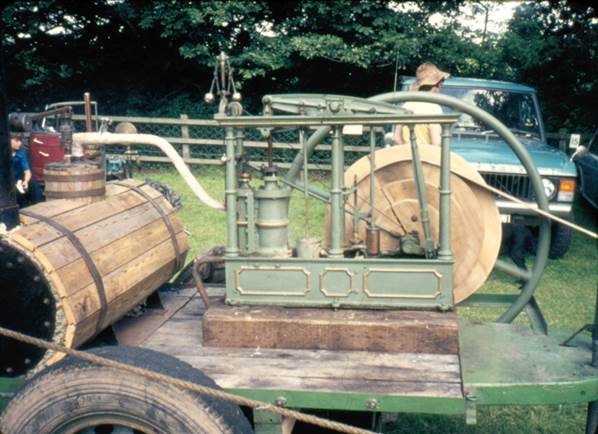 The 1830 Market Lavington made steam engine in about 1973

Our curator excuses his lack of memory with regard to this photo by saying, it was probably taken by my wife. She tended to take colour and I did black and white.

The photo dates from about 1973 and was taken at a rally in Seend. Rog, the curator didn’t live in Market Lavington then and had never heard of William Cambridge but clearly, one way or another, a photo was taken of this magnificent old engine which was actually working to drive some machinery.

The boiler, on the left is not original – boilers just don’t last for 140 years which would have been the approximate age of the engine at the time. The drive mechanism with the belt heading off to the right is probably a later addition as well so let’s concentrate on the engine itself. 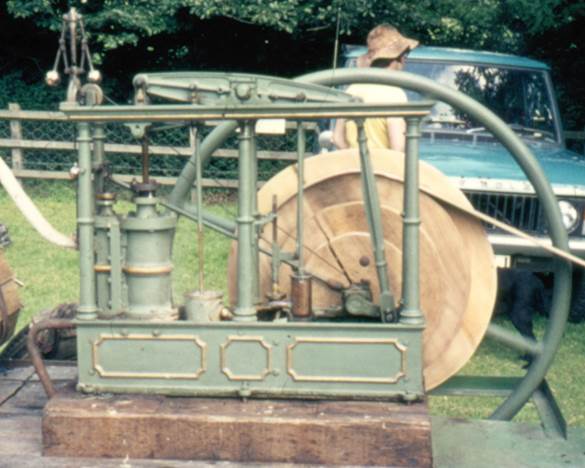 What a little beauty that is. It was made in about 1830 in Market Lavington (Mr Cambridge had premises roughly where the Workmans’ Hall now stands) and was first used in Chitterne. It was discovered in a barn in Shrewton in 1969 and put into working order. As far as we know it now resides in a barn, in pieces, and not that far from Market Lavington.

Well, we love this picture. We love it because it is now the best we have of this fine piece of local history. And the technically minded love it because it clearly shows the James Watt governor. That’s those balls on the left hand side which spin round as the engine goes. If the engine goes fast, the globes spin out further which makes an adjustment to slow the engine. Clever people these 18th and 19th century engineers!