Recently, this blog has looked at the area around Market Lavington’s Market Place on a number of occasions. Today we look at the entrance to Woodland Yard, actually off High Street but facing on to the market area.

Woodland Yard is the area which now has industrial and commercial units. Until about 1960, the yard was entered via a carriage arch which had a room above it. We think that a photo used earlier on the blog was taken from the room above the arch.

At about the time that the Market Place was redeveloped, the agricultural engineers in the village, Wordley’s, decided to remove the arch and the room above to improve access to the yard which they used, at the time. Agricultural implements, like combine harvesters were getting bigger and those giants of their day could not be moved underneath the arch. So the arch went.

This photo, taken in 1960, shows the arch as demolition began.

The scaffolding is up and men are working on removing ridge tiles from the top of the roof. The whole building was taken out, including the upstairs and downstairs rooms on the right. Beyond that is the building which, for many years was a hardware shop. In the 19th century, this had belonged to the Baker family and later to the Phillips family. More recently, the Bulsons and then the Hulls ran the shop. It is now a private house.

A member of the Baker family sketched their shop and the Woodland Yard Arch – we don’t have a date for the sketch. 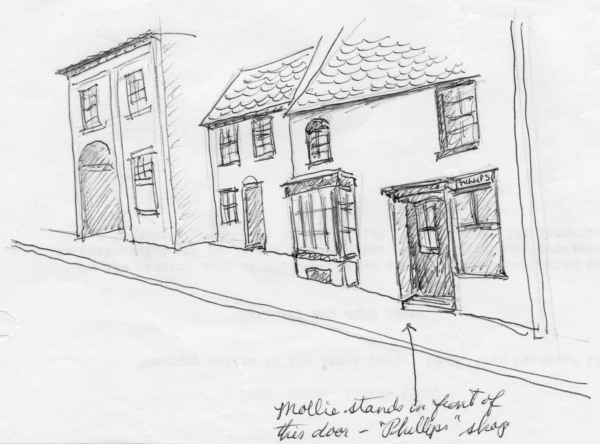 To the left of the arch is the butcher’s shop which, at that time was being run by Mr Pike.  This has been a butcher’s shop for 2 centuries and we are delighted to say that it still is.