These were for the chop 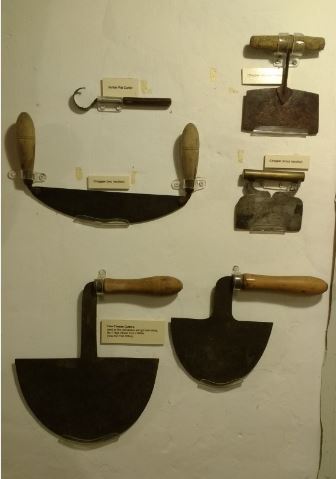 Chopping tools on the kitchen wall

Visitors to Market Lavington Museum will know that we have a kitchen featuring many appliances and utensils from Victorian and Edwardian times. Some of our displays are changed every year, but these tools on the wall are a permanent fixture.

Apart from the butter curler (c.1910) at the top left, they were all used for chopping. The tool below the butter curler, with two swivelling handles, belonged to a lady on Spin Hill and is said to date from the 1920s.

The two large cheese cutters, probably dating from the 1880s, were used at 1 High Street, Market Lavington, presently occupied by the Post Office, but formerly a baker’s and grocer’s shop.

We do not have room in our museum cottage to display all the artefacts at the same time. These two small choppers are in store at present.

All of these objects have wooden handles, some of which are delightfully smooth, indicating that they were well used in their time. However, they all share the problem with iron based blades, that they go rusty when exposed to air and moisture – typical kitchen conditions.

Iron and chromium alloys were known in the 1820s, but it wasn’t until about the time of the First World War that what we know as stainless steel (containing at least 11% chromium and less than 1.2% carbon by volume) became available for knives and other blades, gradually becoming the metal of choice for cutlery and kitchen tools.