We do not keep stuffed animals at Market Lavington Museum. Many people would consider this a wrong thing to do in the 21st century but apart from that there are problems of storage space and deterioration.

However, we think it fully right to record what happened in the past and there was a time when a stuffed animal was considered just the thing to have as a piece of sitting room décor. And so much the better if the animal had been acquired by the head of the house. It would prove how manly he was. So we do have a photo of one such animal – a very beautiful looking white stoat. 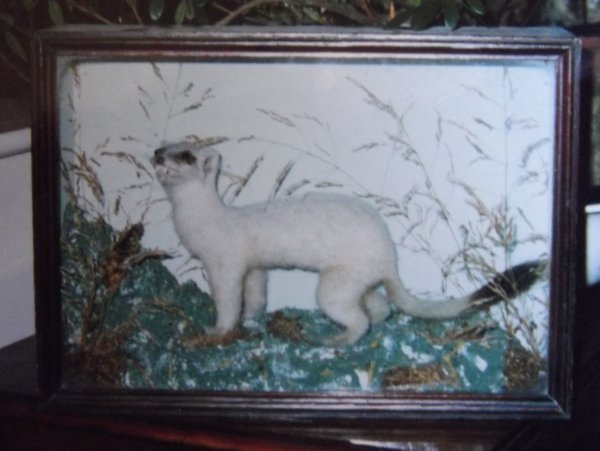 This stoat was a local animal. It was shot on Salisbury Plain by a Lavington man, Bill Perry. Bill, a shepherd, was almost always known as Shep. He lived with his wife Edith at The Hollow on White Street. No doubt the beast had an honoured place in the couple’s home.

If you decide you want to preserve an animal you have shot, where do you go for a taxidermist?  It seems that in Market Lavington you could turn to Mr Hussey. This could have been Walter Hussey who also lived on White Street.

As you might tell, we are a bit short on information here. If anyone can tell us more then do get in touch.