But if truth be told, it must have been a hard slog scratching a living from the rather thin chalkland soil. Running a farm was certainly a seven day a week, 365 days a year job that involved a whole family as well as paid labour. As the extract says, the farm had to be self-supporting. One imagines the Parrott family, who took over the farm towards the end of the nineteenth century, could not be fussy about what they ate or even what they wore. And below we see them on very much a work day. The thresher had come and that meant a hard day’s work for one and all. 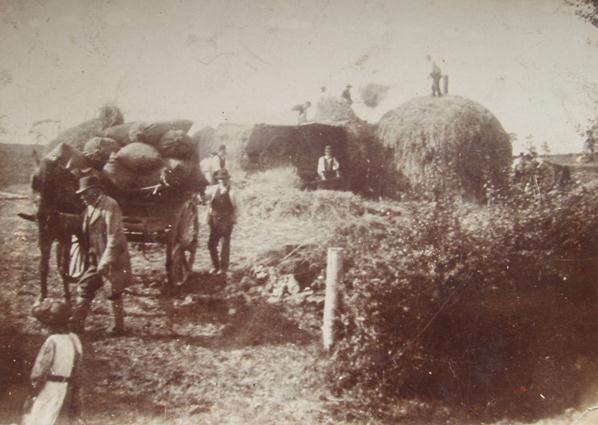 Threshing at Candown Farm, Market Lavington in about 1900

We see at least 11 people and a horse in the photo. One person stands on the corn stack and passes suitable quantities of corn over to the thresher. Here, the corn will be tidied and fed into the machine. Three different materials will emerge. The grain is delivered to sacks and we see a cart load being led away. The straw will emerge elsewhere and somebody will need to gather it and store it. Dust and small pieces – the chaff will need somebody to keep shovelling it all away from the machine. Really there was nothing romantic about the hard graft.

But Candown Farm has vanished from the scene, for it became part of the military range. These days there is no trace of the farm – and that adds to the sense of romance.

The Parrott family were able to move on to other farms and there are still descendants in this area.