Tom Gye, widower of our museum founder Peggy, begins to wonder if he might be the oldest living villager – if he excludes residents at the nursing home.  He’s certainly amongst the oldest and museum folk visit him fairly regularly both to offer him company and to learn more about past times. Tom is old enough to remember events in the 1920s.

We recently came upon a photo which had the word ‘Gye’ scrawled across the back so we took it to Tom for identification. Tom’s eyes lit up and he smiled as he said, ‘well that’s my dad.’ 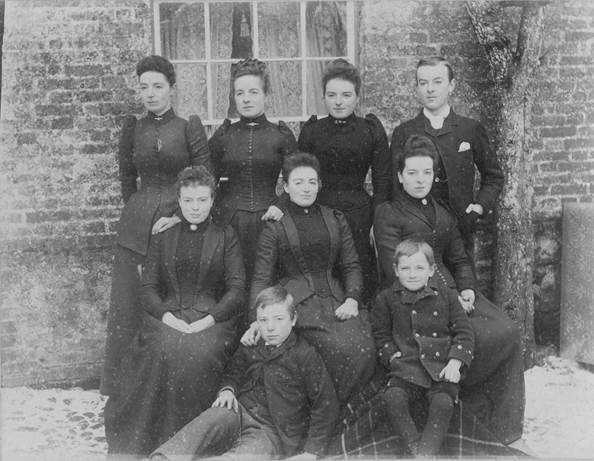 Father, aunts and uncles of Tom Gye, all born in Market Lavington

Tom’s dad is the youngest lad at bottom right. He was called Joseph Edward Gye and he was born in 1883 which gives us a rough date for the photo of 1888-1890. Talking to Tom always brings extra bits of information. Apparently his father was always known as Teddy as a youngster. It was Tom’s mum who decided he should be called Jo.

Tom’s grandparents James and Mary Ann had the nine children. The six girls came first followed by the three boys.

Tom was the youngest child of a youngest child. The aunts were approaching 60 when Tom was born and he did find it hard to identify them, for certain, in this photo of them as youngsters. But he thinks, in the back row  from the left there is Aunty Het (Hester), Aunty Sal (Sarah), Aunty Em (Emily) and Uncle George. In the middle row there was Aunty Bet (Elizabeth), Aunty Flo (Florence) and Aunty Win (Winifred).  At Bottom left is Uncle Tom (Thomas) and his father is the other lad.

Brief  BMD information of these nine, as far as is known, is given below.

Thanks to Tom for this information and for so much more.