Tom was an Easterton based carpenter with a lifespan covering most of the twentieth century. At one time, Tom was almost Mr Easterton for he was heavily involved in local affairs and he was the voice of Easterton on the BBC Wiltshire Radio.

It is no wonder that Tom was selected to be presented to Princess Anne  when she visited the village in 1985.

Tom was a founder and long term supporter of Easterton Village Hall and we have an undated photo of Tom and the committee when they won an award for the best run village hall in the Kennett district. 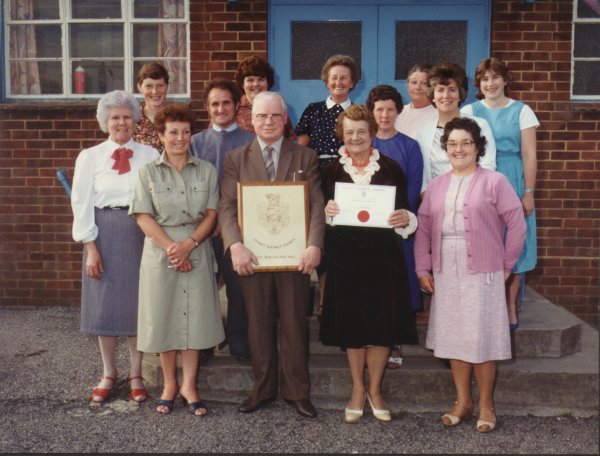 Tom Jefferies holds the framed certificate for the best run village hall. He is surrounded by other hall committee members

Tom’s main trade may have been as a carpenter, but he also did other tasks. At the museum we have a drain inspection cover badged with his name.

Just recently, our curator was doing some different research and came across a Jefferies family in Easterton in 1851. John Jefferies, who was born around 1809 was a carpenter.

We believe John was the direct ancestor of our Tom.