It is nearly a year since we last looked at the Tudor Cottage by the Northbrook. Then we featured a couple of pictures – one from the 1950s and one from the 1980s. You can click here to see that account of the sad end of this house.

Today we are looking at a photo from the late 1960s so that we can discover a little more about the house, the times and an occupant. 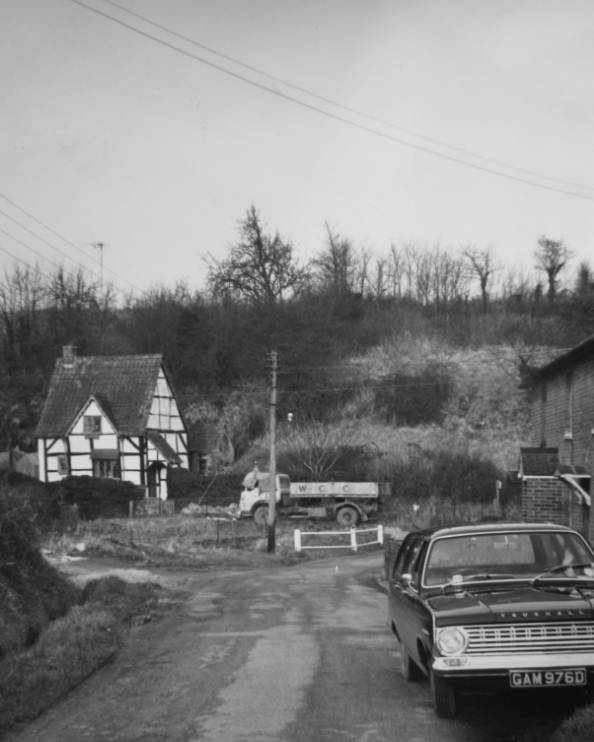 This is the road which, like the stream which passes under the bridge with the white railings, is called Northbrook. In the foreground there is a modern (for the time) Vauxhall car. The D registration was for 1966.

The cottage we are considering is at the left. It is set below a steep sandstone hill and was obviously out of sight as far as the TV transmitter was concerned for we can just make out a TV aerial on a tall mast.

Parked outside the house is a WCC lorry (Wiltshire County Council). This seems to have windows sacked over, so presumably it is a cold and frosty morning.

Tommy Burden, who lived in the cottage worked for the council so the lorry was presumably the one he was using. Tommy was born, probably in the same cottage, in about 1905. His father, William, was a road man – responsible for keeping roads in order.

We think Tommy married Joan Sylvester in 1943. The 1964 electoral roll shows Thomas and Joan together, on Northbrook.

We would love to hear more from anybody who recalls the Burdens of Northbrook, Market Lavington.