At Market Lavington Museum we believe we should preserve information about what happens now, in the parish, for the benefit of future generations. So today we are bringing you a photograph of an event which happened only yesterday.

The main railway from London to Exeter and Plymouth runs through the parish. Normally, the trains are of the old Inter City 125 design. These have operated the passenger services now for some thirty years. But from time to time a slot is found in the timetable for steam hauled specials, which take people for a journey of the past. The 22nd May saw one such special – a train from London Paddington to Weymouth. What made this trip special was that, not one, but two locomotives were used to haul the train. 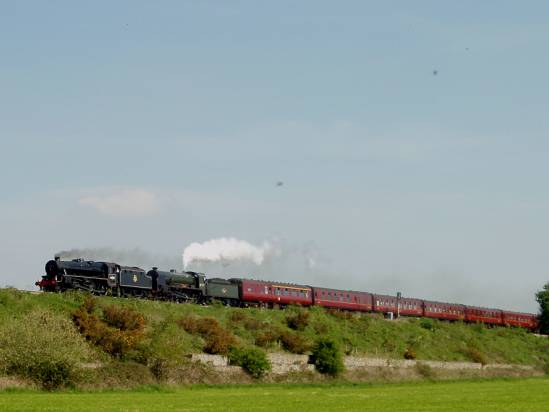 There goes the train, heading west over the Lavington Embankment.

One of the engines has steam to spare for this stretch of line is on a gentle downhill slope but, from here, it is only a short distance for the train before it crosses the Lavington viaduct and starts a climb out of the valley. 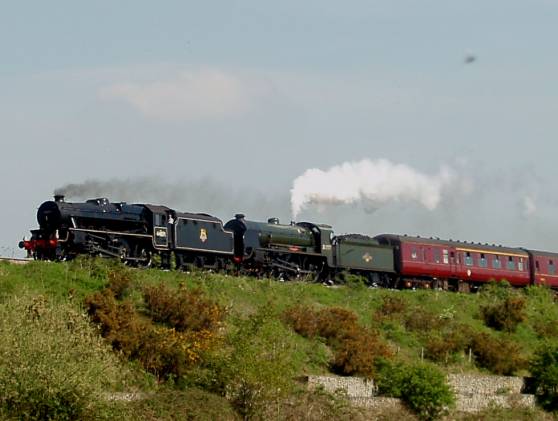 For the railway enthusiast, the two locomotives are Stanier ‘Black Five’ class, number 44871 and Maunsell ‘King Arthur’ Class, number 30777, ‘Sir Lamiel’. Purists might grumble, for neither is a GWR engine, built for this line.

The black five was built for the London Midland and Scottish Railway. The basic design dates from 1934. This engine gained fame as one of those used for the very last steam train run by British Railways on the main line – on 12th August 1968.

The King Arthur class belonged to the GWR’s rival company – the Southern Railway. In its heyday it would have hauled trains from London to the West, but on the line through Salisbury. This engine dates from 1925.

That’s another new photograph for the Market Lavington Museum collection.