Troops in the Market Place

Today we are looking at a still from a Peter Francis film taken in World War II. It shows the Market Place in Market Lavington. 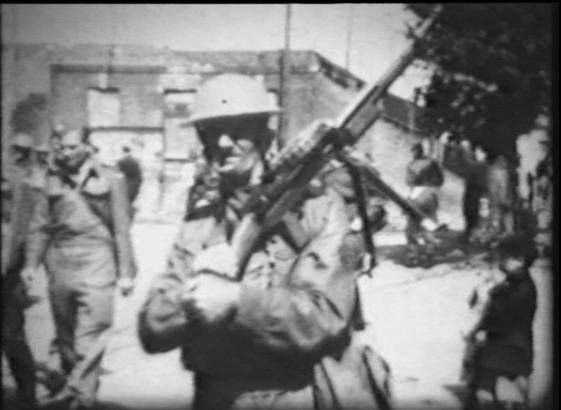 The scene is dominated by soldiers. Market Lavington, The Village Under the Plain, was adjacent to the training ground of Salisbury Plain and soldiers and their equipment were no strangers to village folk. Maybe somebody out there might recognise the soldier forming the main subject of this photo.

Behind that soldier we see the remains of the former ‘Doctor’s House’. This had been an elegant Georgian structure which may have been damaged by fire, but in any case became a part of Fred Sayer’s bus garage and later a part of Wordley’s – the agricultural engineers.  The road known as Northbrook passes down the right hand side of that former house.

The lady in black sitting out and watching the scene just could be Milla Haines whose husband, Tom had been the Market Lavington town crier.

Of course, the quality is not high. We do not know what format Peter Francis used when filming, but it would not have been bigger than 16mm film and probably was just 8mm. This has been converted to VHS video and then moved on to DVD. A low quality original format has, inevitably, lost more in the copying processes.