We recently had a visit from a member of the Usher family who lives in Norway. 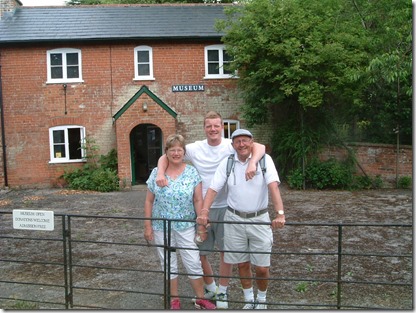 Ushers at the museum

He’d like help with tracing information about his family who lived in Market Lavington in the 19th century.

He sent us this information.

George Usher 1843-1910 b. Market Lavington – My Great Grandfather who married Louise Brown and moved and lived (and died) in Salisbury with their 11 children, I have details of most of them and he died in 37 Endless Street, now a B&B establishment.

In 1851 15 year old Mary Jane was a servant in the house of James Farmer, Butcher, 17th High Street.

In 1815 17 year old Elizabeth was a servent in the house of Cornelius B. Holder, Minister of Market Lavington Chapel, Market Place.

In 1851 Alfred & Ann lived in Townsend, number 10 in my notes, whether this is a street number or a register number in the census I am not sure !

In 1861 George lived with his parents in High Street, Cabinet Maker.

Our thought – for we have no information – is that the Ushers were members of the non-conformist church in Market Lavington.

Can anyone out there provide more information?