Well not for me, obviously – but this post does start in a more personal way than some.

Being involved with a museum is an absolutely delightful thing to do. Like all of us at Market Lavington Museum, your blog writer is a volunteer. There is no personal payment at all for doing it. It is just done for love – and loved it very much is. I’d never pretend that our blog is the most read web page in the world. I think in the world of marketing it would be called a niche product. The audience is really quite small (42396 views in 2013) but it is a dedicated and caring audience.

A Christmas card I received this year had a little extra item in it – an election card. 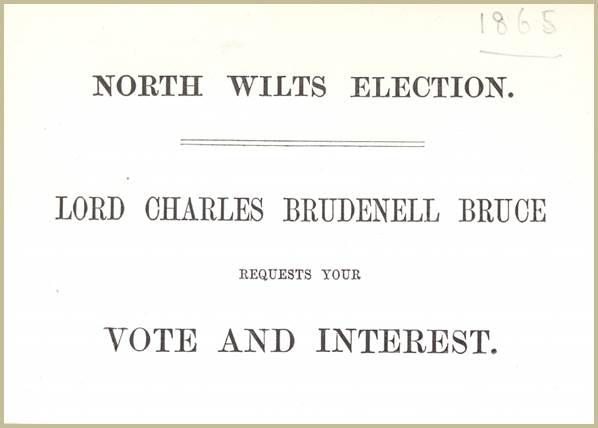 We are being encouraged to support Lord Charles Brudenell Bruce in, according to a hand written extra, the year 1865.

This gift had had some research done on it for it might not be natural to imagine Market Lavington and Easterton being part of North Wiltshire – but they were. We do not know that this card was given to a Market Lavington or Easterton elector, but it might have been and other identical cards certainly would have been.

For the record Lord Charles Bruce won the election representing the liberal party and held the seat until 1874. He served in the government of William Gladstone and became a Privy Counsellor.

How lovely that an extra like this should arrive, unannounced, with a Christmas Card.