A few days ago, Rog, our curator, went to chat with residents in the care home in Market Lavington. He took along a goodly array of photos of the village in the past and also of some of the artefacts in the museum.

It was this photo which probably attracted most interest. The residents, aged between 77 and 99, remembered using such items. 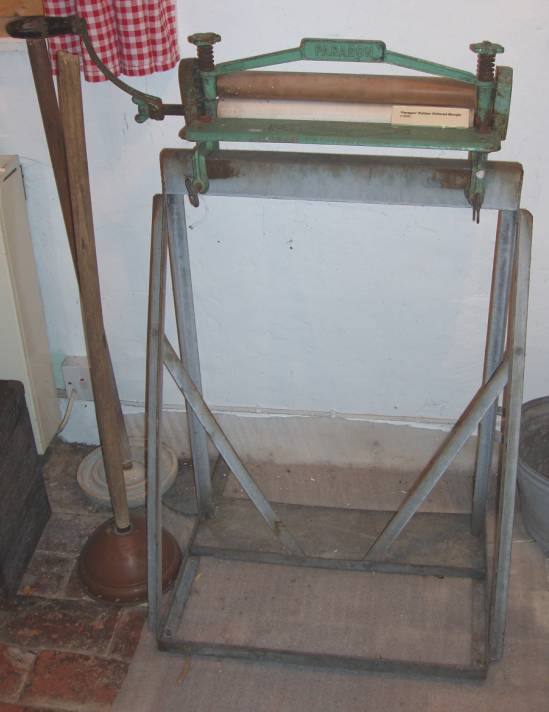 The main item is a mangle, which is, badged ‘Paragon’.

Close up on the wringer

This item, with a structure of cast iron was made in the 1930s. It is a ‘Paragon’, superior quality wringer, British made and guaranteed for 5 years. The rollers were made of rubber. Its five years guarantee period is well over for it is now about 80 years old, but no doubt it would still work.

For youngsters, unused to such mechanical devices, the operation was simple. Wet clothing was fed in between the rollers, the wooden winding handle was turned and the water was squeezed out of the washing. People with foresight, placed a large bowl under the wringer to collect the water. The springs on either side of the top roller could be adjusted to alter the pressure.

Such items can still be found in use. In fact our curator says he last used one in 2010 on a campsite in the UK.

The other two items, to the left of the mangle in the main photo were known as possers by some and washing dollies by others. In a modern washing machine the clothes and water are ‘agitated’ to help remove the dirt. The posser was used in conjunction with a bucket, a bit like a small metal dustbin, which some called a dolly tub. The posser, on its long handle, then provided the ‘agitation’, stirring water and clothes around. These have more or less vanished from the domestic scene now.

Returning to the curator’s visit to the nursing home – he took with him his own old wind-up gramophone and some appropriate records. The residents regarded this with pleasure but no great surprise. The young care assistants (and what a grand job they do) were more gobsmacked by it. In these days where even the CD is losing out to the ipod, a device which needed no electricity to produce sound seemed just amazing. Perhaps gramophone and records should be in the museum.