Welfare and Comforts in WWII

World War II started in early September 1939 and, by the 30th October, a meeting was held to set up a Welfare and Comforts Fund. The idea was to raise money and make articles for the comfort of the Market Lavington men serving in the forces overseas. Assistance would also be given, as needed, to the dependents of servicemen. This might be practical help with the cultivation of their gardens and allotments.

Market Lavington Museum has records of their meetings and fund donations. Of course, sheets of paper and pages from books are not particularly visually appealing, but they paint a good picture of what was going on in the village about 80 years ago. 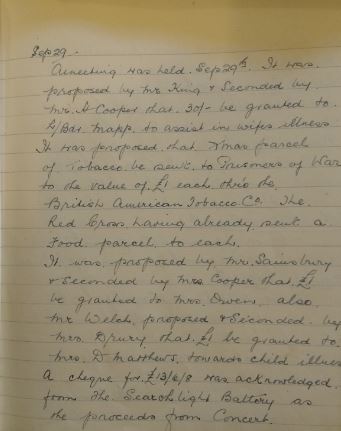 These minutes from the meeting on 29.9.1941 tell us that the Red Cross had already organised food parcels for prisoners of war, so our local committee would send a Christmas parcel of £1 worth of tobacco to each prisoner. The minutes also show decisions to grant sums of money to local residents to help when they had a sick wife or child.

But where did the money come from for such aid and comforts? Well, these minutes show that the Searchlight Battery had held a concert and sent the proceeds to the fund, but the accounts show more regular fund raising events. 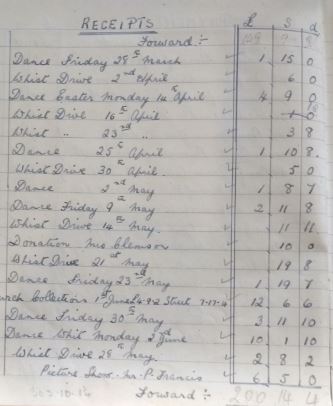 This page of receipts from the accounts book shows that there were weekly whist drives on Wednesdays and dances on Fridays bringing in monies as well as personal donations and the proceeds of a picture show put on by Peter Francis, the village photographer.

Our final picture shows an expenses sheet from the accounts book. This page covers part of 1942 into 1943. 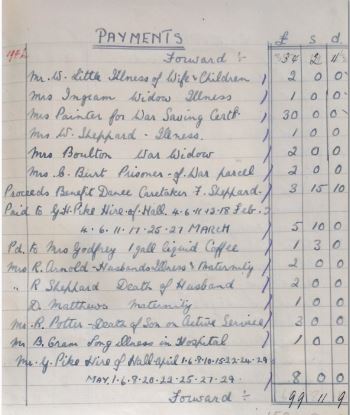 The committee had to pay for the hire of the hall for the whist drives and dances and they also bought a gallon of liquid coffee, presumably needed for refreshments at their events.

Most of the entries refer to payouts to people in need due to illness or war related tragedies. On this page alone, financial support was given for four people due to illness and there are two mentions of maternity. (The National Health Service didn’t come into being until 1948, three years after the 2nd World War.) Support was given to a war widow and also on the occasion of the loss of a son on active service. Another donation was to give some financial assistance following the death of a husband.

This is just a snapshot of the many accounts we have in the museum, detailing the support given by local people to families in need in the community throughout the war.