We have already seen the railway milk tank wagons which West Park Farm used from the 1930s. Today we are looking at lorry delivery of churns of milk, probably in the late 1920s 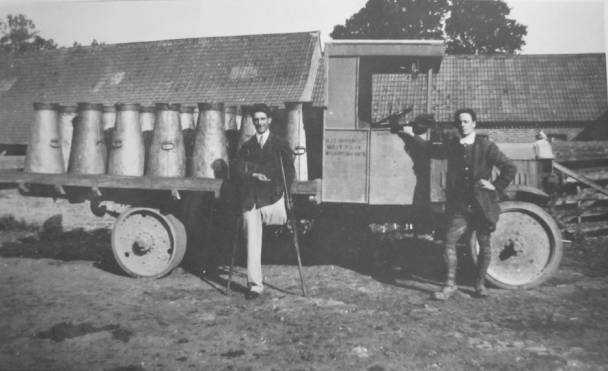 We see a fairly basic lorry with what look to be heavy metal wheels of almost steam roller proportions. Perhaps these were suited to coping with the soft ground found on farms. The flat bed behind the cab is laden with large churns. These are probably of 10 gallons capacity which would mean the milk and churn would weigh about a hundredweight (50kg). That’s quite a load to lift up onto a lorry.

But you’ll note that Laurie Plank, standing in front of the churns, has only one leg and is using crutches. Now how on earth did he cope? In fact we gather that Laurie played football with youngsters in the 1940s taking giant strides on his crutches to outpace his opponents

Lawrence Plank was born in about 1908. At the time of the 1911 census the family of Charles and Eliza, with 6 of their 8 living children, lived at Broadway in Market Lavington. Lawrence was the youngest child. Father, Charles was a labourer at the brickworks.

Laurie Plank, as he was called, trained as a tailor. It seems he lost his leg in an accident with a motorised vehicle but this was something he never talked about. He worked though, as we see, at West Park Farm.

Laurie appears on the 1939 electoral roll, living at Broadway Cottages. Planks still occupied these cottages in 1954 but Laurie was not listed as the head of the house.

A photograph we have at Market Lavington Museum shows Laurie, amongst others, enjoying a pint at The Green Dragon in the 1950s.

Laurie never married. In the 1960s he lived at Parsonage Lane with his brother.