What do we know about the Sayer Family?

Mr Sayer has featured before on these pages, yet at Market Lavington Museum we know very little about the man and his family. But more information has come to light since mentioning him a couple of days ago. He set up and ran the Lavington and Devizes motorbus company, probably in 1911 or 1912. We know Mr Sayer (Fred) was a very large man – he featured on a Hospital Week ‘Guess the Weight’ competition. (Click here to see it)

A picture we have shows Mr and Mrs Sayer and their son, Fred, on one of their buses. 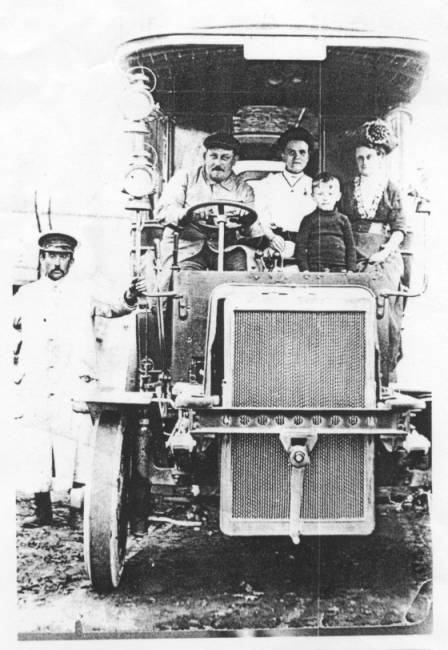 Mr Sayer is at the wheel of the bus with his wife alongside him. The child is their son, also Fred. The other lady on the bus is Mr Sayer’s mother. A member of the staff stands alongside holding onto the bus.

It is almost certain that at the time of the 1911 census the family were in Stroud in Gloucestershire. A family there consists of  a bus driver, Frederick Herbert, born in 1880, Mabel, born in 1880 and Frederick Herbert, born in 1905. If this is the right family – we are almost certain it is  – then both Fred and his wife Mabel (née Weston) were born in the Bath area although they married in the Kings Norton area, in the Midlands in 1900). If anybody could verify, or even refute these thoughts then do let us know.

What we do know is that our young Frederick Sayer married Jessica Trotter, daughter of the landlord of the Volunteer Arms in 1929.

Can anybody tell us any more about this family? If so, do please contact us.