We recently came across this piece of writing by Tom Gye about the wheelwrighting shop at Gye’s depot on White Street.

Enclosed is a shot of the old workshop on the first floor of the Barn (malthouse), taken when the last wooden wheels were made in the 1950s. 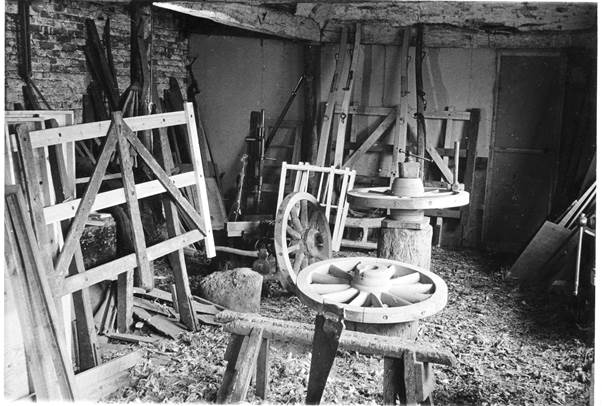 Wheelwright shop in the 1950s

The higher of the two wheels resting horizontally is supported on a section of hollow tree trunk which I suspect had been used like that for well over a hundred, maybe two hundred years. On top of the block crowning it is the end of a long rod which passed down through the hollow stump with a threaded end which engaged a ‘female‘ thread secured under the floor enabling the wheel to be held firmly in position while being worked on.

Almost invisible at the rear are ‘shafts’ for horse drawn wagons which had been repaired.

On the left there is a ‘tail ladder’, removable frame for attachment to a wagon bed (one at each end) to facilitate extra loading space for sheaths of corn or loads of loose hay. Near that with an axe bedded in it is the ‘chopping block’ very essential with wheelwrighting and agricultural vehicle repairs. Various items of irregular shape were roughly hewn before finishing by drawknife and spokeshave. That block, another section of tree trunk, was at least half a metre higher when first put into use.

For many years the principle source of heating in the house was the fire in the kitchen range. My father was always the first downstairs and would get the kitchen range lit. As a schoolboy my job each evening was to prepare a box of kindling for that purpose, there were always offcuts of softwood from joinery jobs lying around and wood shavings produced from hand planes. I had to reduce the offcuts to kindling size by splitting them with the axe on the chopping block. Sufficient quantity would be placed in the bottom of the box and then handfuls of shavings placed on them all ready for fire lighting. If I was in a hurry to join my schoolmates with some project (probably mischievous) I would arrange the minimum of kindling wood in position to support the shavings near the top of the box making it all appear like a normal amount. Next day of course I would get my comeuppance.